Where it all began…

The first bus enthusiast tour in Melbourne was held on on 27 July 1968.

The two vehicles used for the tour were from Nuline Bus Service. 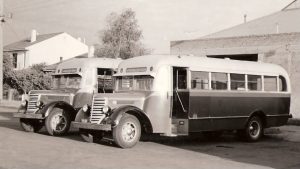 Both vehicles were Federals fitted with the Ansair Metro style body. Both were originally powered by petrol engines, and saw brief service on the Hartwell to Toorak tram terminus route operated by Stan Edwardes.  He then operated them on Route 77A, the Murrumbeena Road service which he sold to Jenner’s Milk Transport (subsequently Murrumbeena Bus Lines) before being sold to Mr Spence at Nuline on 12/4/1954.

The outing travelled some of their routes which at the time included Moorabbin to Caulfield via South Rd, Middle Brighton & Bambra Rd (Route 115A) and Hampton to Moorabbin via Hampton St, North Brighton, Centre Rd and Nepean Hwy (Route 104A). This was still a couple of months before Southland Shopping Centre opened.

The bus was driven by the late John Masterton who was a casual employee of Nuline at the time, who organised the day with the assistance of Paul Nicholson and Bruce Tilley.

Bruce was interviewed on popular talkback radio station 3AW on the day of the tour, with soundbites appearing in the half-hour long midday news bulletin.

Two more tours were organised latter in 1968, culminating in the formation, in December 1968, of the Bus and Coach Society of Victoria. Fifty-two years later we are still going strong! 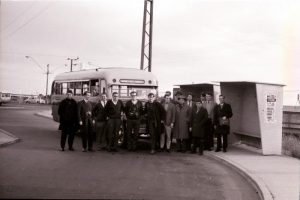 Publications Over The Years….

With the formation of the BCSV at the end of 1968, the founding committee soon realised the need for a newsletter to keep the growing membership abreast of both industry news and club events.

With that in mind the first BCSV News Sheet appeared in June 1969. Issues were typically 12 foolscap size pages done by roneo printing as one of the Committee had access to such a machine through a school. Persons of a certain age will doubtless remember the distinct smell of freshly roneoed class notes at school.

The content comprised short articles, news items, advice of forthcoming meetings and tours, fleet alternations and a cover sheet of black and white photographs. Most of the material was produced by the early committee members comprising John Masterton, Geoff Mann, Bruce Tilley and Keith Kings with occasional contributions from others.

The News Sheet continued in much the same format up until the last issue, which was produced in June 1975.

The Way We Were

Younger readers need to understand that in pre-internet days, the main ways in which bus enthusiasts kept up with what was going on was by attending the club meetings (& other informal social gatherings such as slide nights), where people chatted after the main syllabus item had concluded, and by reading the club newsletters, the arrival of which in the mail was looked forward too avidly by most.

Also in those days when a person took a photo whilst away somewhere they first had to wait until they returned, then send slides off for processing which took 1-3 weeks and only then did you see your results.

It’s all a far cry from today when an enthusiast goes to a depot, takes a photo and can post the photo and the gen on line within a matter of minutes.

In New South Wales the Historic Commercial vehicle Association had been established a few years before the BCSV with the aim of catering to both bus and truck enthusiasts. They also produced their own publication on foolscap size paper folded in half. This focussed on club activities, preservation and government bus news with some coverage of other events.

A second publication had been started by members of the North Sydney Boys High School Bus Club which focussed more on fleet alterations and private bus company operations. This operated from 1971 to 1975.

In Adelaide, there was the Bus and Coach Society of South Australia which distributed newsletters covering S.A. news and bus fleets and in Western Australia the local bus and tram preservation group produced “Rattler”.

In Tasmania, Ken Flood produced a private news sheet covering rail, bus, ferry and other transport news from the island state. Queensland was a bus information desert back then.

1974-75 discussion took place between the HCVA, BCSV and BCSSA about the possibility of producing a single national publication to service the needs of the three clubs. The BCSV was already interested in producing more interstate content in particular recording news and fleet data from states such as Queensland and Tasmania.

Agreement was reached and from August 1975, the HCVA News Sheet morphed into Fleet Line, a joint publication of the three clubs but edited and produced in Sydney. The BCSV and BCSSA new Sheets ceased from June 1975.

The first issue of Fleet Line, appropriately, had a cover photo of the very first Hastings Deering (Ford) Fleet Line bus, owned by Dundas Valley Bus Co. Over the years the quality of publication increased with the use of glossy paper and photos and even some colour pics. Fleet Line also adopted the new international paper sizes and was issued as B5 size.

The BCSV remained a partner in Fleet Line for a decade before withdrawing from the beginning of 1986 to restart its own publications. There were several reasons for this.

One was that despite the best efforts of all concerned Fleet Line (and indeed its successor today’s Australian Bus) was always perceived as being too Sydney centric, favouring reportage from that State over other material. In particular some BCSV members considered that recording of Victorian bus history was not receiving sufficient coverage.

Another was that efforts to report fleet news from other states (the BCSV gen men were the main fleet news reporters in that era) was falling behind due to Fleet Line’s lack of capacity to print all the available data. To that end during 1985 the BCSV had produced three issues of a fleet notes only publication called Australian Bus Panorama which was available as an insert into Fleet Line.

The BCSV Committee gave notice to the HCVA of our withdrawal from Fleet Line from the end of 1985 and commenced preparation of its own two new publications which would alternate on a monthly basis.

The first issue of Australian Bus Panorama appeared in March 1986 edited by Geoff Foster, who is still doing it 33 years on! The first article covered the weekend extension of government bus services from Deer park to Melton and the second issue had coverage of the opening of the O-Bahn in Adelaide. ABP generally ran to 48-52 B5 size pages with an article or two, news from around the states, fleet alterations and around 16 black and white photos. 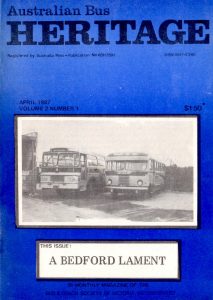 The first issue of Australian Bus Heritage followed in April, edited by Fred Coulson (and later by Iain Drummond) and covered primarily historical items. Greame Cleak’s History of Melbourne’s Private Bus Routes, which had been running in Fleet Line, transferred to ABH from route 600 onwards. Other articles included history items on both bus companies and chassis/ body builder makes. ABH varied from 28 to 52 B5 pages in size.

The early issues of both magazines took a step backwards in quality of production due to budget constraints. Glossy paper was abandoned. The BCSV had managed to obtain its own offset printing machine which was duly installed into the external laundry of Geoff Foster’s house at Ferntree Gully. It was hot in summer and cold in winter in there.

Many issues were printed by the late Colin Hirst, who was also a printer at work, and over time he taught a couple of other members to operate the machine. Being an old machine it was rather temperamental resulting in some issues being delayed or having presentation issues. Costs were also kept to a minimum through generous, though quite unknowing, donations of A4 paper reams by certain government instrumentalities.

Photos were done as bromides, the whole lot was pasted together on paper sheets from which metal printing plates were made. These were then run through the machine to print the pages which had to then be manually collated and stapled.

The printing team was also the distribution team and this function has always remained separate from the editing / production process. In general this burden has fallen on successive BCSV Secretaries with greater or lesser degrees of help being either sought or received. 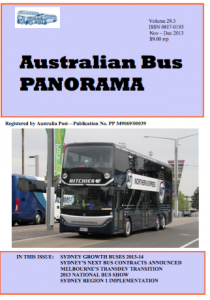 After five years the BCSV Committee decided to cease producing ABH and to include historical content into ABP. The last ABH was issued in June 1990 and, from July, ABP went to nine issues per year. However this proved to be rather too much for Geoff Foster to cope with and after two years a further amendment was made to the publication schedule. There would now be six regular bi-monthly issues plus a Christmas special which would have a mainly historical content. It is this format that continues to this day.

The remaining years have been about gradually improving the quality of presentation. This has included the move to commercial rather than back yard printing; the change from manual typewriters to computer based production; changes from photo bromides to scans and then to jpegs; the return to glossy paper; the introduction of partial and later full colour reproduction of photographs etc.

The sources of material have also changed considerably. Back in 1986 much of the content arrived in the Editor’s mailbox and had to be copy typed for use in the magazine. Nowadays most of it comes by e-mail or is sourced from websites and other online forums. Notable agents of change have been the introduction of the Bus Australia website, with its associated discussion board and the Australian Bus Fleet Lists. The work of the Australian Timetable Association is also worthy of mention.

Although the occasional item still arrives in the mail, generally the entire process of ABP production can now be done from Geoff Foster’s desk until the time when a PDF is e-mailed to the printer. Secretary Paul Kennelly then collects the printed mags and does the mailout.

The introduction of a proper BCSV website takes us into another new era. The website’s Virtual Museum will include reproductions of articles which have previously appeared in the club’s magazines over the past five decades with content to be gradually added including company histories, route histories, recounts of members’ trips over the years and other items considered worthy of permanent record.