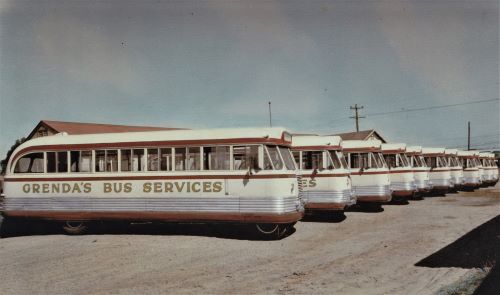 The Bus and Coach Society of Victoria (BCSV) Annual General Meeting is to be held on Sunday 18th September at the Hawthorn Tram depot / Melbourne Tram Museum at 3pm.

After the AGM proceedings, Paul Kennelly will present a retrospective on Grenda’s Bus Service covering the era from 1945 to 1990.

Hawthorn Tram Depot is located at 8 Wallen Road Hawthorn, near the corner of Power Street and Riversdale Road. Tram Routes 70 & 75 stop outside, with Hawthorn Station a 10 minute walk away.
ELECTIONS
Elections for the Committee will be conducted at the AGM along with the presentation of the annual and financial reports.
Vacant positions include:
Executive Positions:
* President
* Deputy President
* Secretary
* Treasurer
Officers:
* Assistant Secretary
* Tours Organiser
* Historical Research (Heritage/Archive)
* Membership
* Restoration
* Safety
* Publications Editor
* Social Media Officer
* Website & Virtual Museum Content Officer
We’d also welcome those who wish to join us as general committee members.
As always members are encouraged to put themselves forward if they believe they can make a contribution to the Society, particularly helping us organise tours.
NOMINATION FORMS
Nomination forms will be emailed to members two weeks before the AGM. They can be downloaded from our website:
DOC – https://bcsv.org.au/wp…/uploads/Notice-of-2022-AGM.doc
PDF – https://bcsv.org.au/wp…/uploads/Notice-of-2022-AGM.pdf
PROXY FORMS
Members who are unable to attend the AGM may nominate a proxy by way of a form which clearly identifies the name of the member’s proxy and is signed by the member.
To assist members, an example proxy form has been prepared.
DOC – https://bcsv.org.au/…/upl…/2022-BCSV-AGM-Proxy-form.docx
PDF – https://bcsv.org.au/…/uploads/2022-BCSV-AGM-Proxy-form.pdf
Proxy forms should be declared by your nominated proxy at the commencement of the AGM.
MEMBERSHIP RENEWALS
For those yet to renew their membership, see https://bcsv.org.au/membership/
Members must be paid up for 2022/2023 to vote in the election.
AGM LOCATION
Our bi-monthly Sunday social meetings are held at Hawthorn Tram Depot / Melbourne Tram Museum, 8 Wallen Rd, near the corner of Power St.
Alight Tram Routes 70 & 75 at Riversdale Junction. Alternatively, Hawthorn Station on the Belgrave/Lilydale line is a short 10 min walk away.
Each meeting concludes with a short afternoon tea and chatter on the latest industry gossip.
Both members and guests are welcome, free admission.
MODEL RULES
A copy of the BCSV model rules can be found on our website – https://bcsv.org.au/about/model-rules/
We encourage all members planning to nominate to familiarise themselves with the model rules ahead of the AGM
+ Google Calendar+ Add to iCalendar