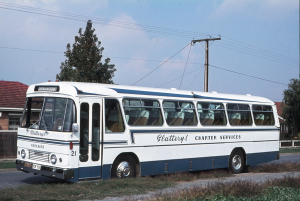 Denning’s Adelaide plant built its own design of straight deck coach. One such example was #21, an AEC Swift 691 in the Slattery, Adelaide fleet, seen at Klemzig in April 1974. (Geoff Mann)