Local bus services to Melbourne Airport were streamlined and further improved on 27 July 2014,, complementing the previous introduction of the Route 901 SmartBus in 2010, finally resolving a long standing complaint of sub-standard and almost non-existent public transport for workers living in surrounding suburbs. A new route was also introduced to serve the Tullamarine industrial precinct.

The improvements fulfilled the last outstanding stage 1 priority action from the previous Labor Government’s bus reviews between 2007 & 2010, although only a fraction of the actual report recommendations have been implemented almost a decade later. 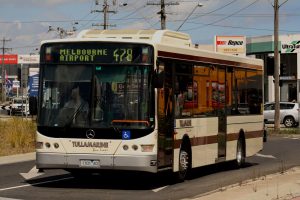 Those previously boarding between Moonee Ponds and Airport West can take a Route 59 tram or Route 477 or 501 bus to Airport West to connect with an airport service. This was an established practice in the old timetable,

The hourly 478 weekend timetable is largely consistent with the former offering, although a second 479 trip to/from Subury has been added. Passengers travelling from Moonee Ponds, Essendon or Niddrie can travel via the 59 tram or 477 bus to connect with the truncated routes.

The weekend return 479 service no longer extends into the CBD, an unusual practise initially to serve Sunday visitors to Sunbury Asylum Mental Hospital, closed in 1985! Despite the almost non-existent service level on weekends, four passengers were noted boarding the single 479 at Melbourne Ariport towards Sunbury on the final day of the full route!

The timetable is designed to offer connections at Melbourne Airport with Route 479 for workers coming from Sunbury.

Route 500 (Broadmeadows – Melbourne Airport – Sunbury)
The irregular Route 500 link between Sunbury and Broadmeadows was abolished, which largely operated just once every 2 hours with no weekend timetable.

Passengers wanting to travel from Sunbury to Broadmeadows, in particular TAFE students, are able to transfer from Route 479 to the Route 901 SmartBus at Melbourne Airport. Any Westmeadows residents however have to change twice, taking Route 477 from Gladstone Park.

An interim myki school bus was introduced between Greenvale and Salesian College to replace the former large deviation on Route 500 but it is believed that students had to utilise a private charter bus from 2015.