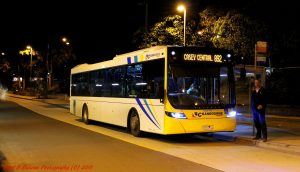 Dozens of Ventura & Cranbourne Transit bus routes across Melbourne’s middle and outer south-eastern suburbs received timetable updates on 27 July 2014, coinciding with the introduction of an interpeak turn-up-and-go train service between the City & Dandenong, with 10 min headways (from 15 mins), matching the previous April 2012 upgrade on weekends between 10am and 7pm.

Passengers on the outer ends of the Pakenham and Cranbourne Lines enjoyed an increase of frequency as well, with the former half-hourly services boosted to every 20 mins.

While primarily each route had adjustments to better meet interpeak trains, other timetable updates across the region included: