Better Train Connectivity in peaks
Peak services generally ran every 44 mins instead of every 40 mins, an attempt to harmonise with trains every 11 mins & to allow for longer trip durations. 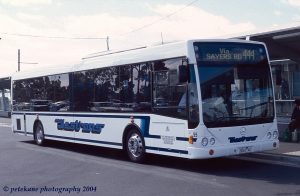 New Sunday Services on 441 & 445
Hourly Sunday services were introduced on 441 & 445, with all bus services across Werrbee & surrounds operating Sundays for the first time.

Route 439 commenced serving the Wyndham Harbour development, although buses had been detouring via Duncans Rd since May 2014 due to roadworks.

Buses no longer operate a large loop around tour of market gardens in Werribee South, where little patronage was generated

Route 445 Stopping Restrictions Lifted
Stopping restrictions on 445 have been removed, a quirk dating back to 2006 when the route was introduced independent of timetable changes on other routes, and intended to allow a single vehicle to do a round trip in a hour