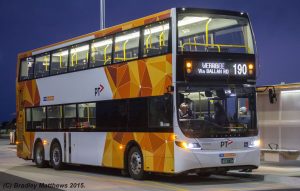 From 21 July 2015 commuters in Melbourne’s outer west enjoyed a major boost to their public transport options, with the opening of the Regional Rail Link and a more streamlined bus network that delivers more direct and more frequent services on several routes, including doubling peak services from 40 min to 20 min headways on a number of corridors and extension of routes to service the new stations of Tarneit and Wyndham Vale.

A summary of the new network, operated by CDC Melbourne’s Werribee & Altona depots:

153 (Williams Landing – Werribee):
Neighbourhood route operating via Old Geelong Rd, Hoppers Crossing Station, Princes Hwy and Synott St. Replaces much of former 493 and part of 446, along with 443 along Synott St. Deviation along Syendes Rd to the State Chemistry Laboratories discontinued due to low patronage.

161 (Hoppers Crossing – Werribee):
Very indirect neighbourhood route largely absorbing the sections of former 436 and 437 not near a direct connector option and/or maintaining Werribee Plaza access for these areas.

190 (Werribee – Wyndham Vale):
New connector route direct along Ballan Rd. Maintains the link between the Geelong line and Werribee, severed with the new alignment, with trips running after midnight seven days to connect with all trains to/from Geelong.

417 (Laverton – Laverton North):
Industrial route and rail feeder now offers an off-peak extension to Aircraft for residents along Bladin St who previously could access 414 directly to the Aviation Rd Shops until 2013.

495 (Williams Landing – Point Cook South):
Now travels via The Strand, reinstating service removed in 2013 with the removal of 416 and maintaining coverage of the deleted 493. Morning peak service now operates every 11 mins (was every 22 mins) to reduce overcrowding, rare on a feeder service in Melbourne!

496 (Laverton – Sanctuary Lakes):
Following community requests, now travels along the sparse Sanctuary Lakes Estate (consisting of golf courses and feature lakes) instead of terminating at the shopping centre on Point Cook Rd. Offpeak and weekend trips extend onto Aircraft to restore access to Aviation Rd Shops for residents in Seabrook and parts of Point Cook.

498 (Laverton – Hoppers Crossing):
New east-west route reinstating cross suburb links lost when 413 and 416 were discontinued in 2013, including access to Central Square Shopping Centre for Point Cook residents, Point Cook Town Centre for Altona Meadows & Seabrook residents and Hoppers Crossing and Werribee Plaza for those in the abovementioned suburbs. New coverage along Hacketts Rd to serve the New York-inspired Upper Point Cook estate due to be constructed in the next few years.

Various interlining and offsetting is a key design of the new network. Route 498 generally continue as 181 to provide access to Werribee Plaza, Route 170 trips often continue at Tarneit as either Route 150 or 151 to Williams Landing via Truganina, while Route 494 and 495 form each other at Point Cook South.

Trips on 439 & 443 generally connect with different arriving trains for residents south of Werribee Station; 150 & 151, along with 494 & 495 are off-set at Williams Landing; 160 & 161 meet alternating trains at Hoppers Crossing for residents in north of the station, while 166 & 167 off-set along Heaths Rd to Werribee Plaza. Passengers on Greaves St North benefit from spacing of 181 and 191 to/from Werribee Station.

Routes 170 & 180 run a 20 min daytime frequency 7 days a week, setting a new standard in premium service levels for the outer west. Buses continue past 2145 until after midnight on Friday and Saturday evenings, matching the 495/4 loop in Point Cook and reflecting council calls for later buses to support the growing youth population.

Services on 190 operate to connect with virtually every train to/from Geelong 7 days a week, with services running past midnight each night and until 0130 on Friday and Saturday evening. Services run every 20 mins on weekdays, and twice an hour on weekends, and largely hourly late at night.

In a surprise boost, neighbourhood routes 151 & 192 also operate to a 20 – 25 min headway during the commuter peaks, however drop to 40 mins during the school peak (when buses are on dedicated school runs) and at other times.

Shortworkings also operate on the 181 along Thames Bvd and Greaves St North during the commuter peak, again boosting services to 20 – 22 mins. Until July 2014, peak services ran hourly along here. Otherwise weekday services run every 40 mins and hourly at night and on weekends.

Passengers on 496 receive buses every 40 – 45 mins during the peaks and hourly at other times, with services finishing at 2000 weeknights and 1930 weekends. Sister route 498 through Seabrook runs a 40 – 45 min service all day weekdays and hourly weekends. This creates some unavoidable overlaps in the pattern during the interpeak.

A selected Route 192 trip after school (16:08 ex Wyndham Vale) is operated with an articulated vehicle to maximise vehicle efficiency – previously these were restricted to school runs, charter work and special event shuttles (such as the bi-annual Avalon Airshow).