In addition to the major changes in Wyndham & Geelong on 21 June 2015, other timetable and route changes took place on selected Sita routes across the northern, north-western and western suburbs.

To allow for the new bus lanes on Victoria Pde due to open in July (later delayed until September), Route 402 no longer travels to St Vincent’s Hospital, instead terminating outside Carlton Gardens on Victoria St.

The former 10 – 15 min weekday daytime frequency has been standardised to 10 mins, while at night buses now run every 20 mins instead of gaps of up to 35 mins. On Saturdays the 20-20-30 headways have become a flat 20 min service, but Sundays the 35 min frequency has been downgraded to 40 mins. Span has also improved, with weeknight trips now departing Footscray as late as 2130 & East Melbourne after 2200. Sunday buses now commence at 0700 instead of 0900.

Route 420 (Sunshine – Watergardens)
Faster runtimes have been implemented on Route 420 after the inaugural timetable in 2014 saw buses arrive their destination by as much as 15 mins early. Following customer requests, buses now travel through the bus interchange at Brimbank Central rather than forcing passengers to wait on Station Rd at what can only be described as the ‘arse end’ of the complex. This will also allow easy transfer with Routes 423 and 424, including for Deer Park North residents who lost their direct bus to Deer Park shops and Sunshine. 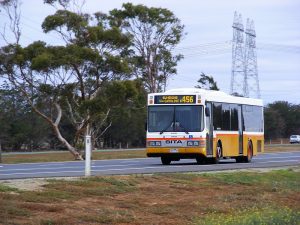 To provide safe access to eastbound buses for Rockbank locals, selected trips on 456 now deviate into the township along Westcott Pde. Unsafe stops along Western Hwy, which passengers could only reach by crossing several lanes of 100km/h of traffic, have been closed. The deviation adds 10 mins travel time to trips, however attempts have been made to smooth headways where possible.

Headways on 456 have also been adjusted. Weekday services have been downgraded from 25 – 30 min headways to a flat 30 min headway. On weekends buses now run every 40 mins, harmonised with Sunbury line trains, replacing the previous 25 – 30 min Saturday service and 55 min Sunday service.