In addition to the major changes in Wyndham & Geelong on 21 June 2015, other timetable and route changes took place on Tullamarine’s bus services in Melbourne northern and north-western suburbs. 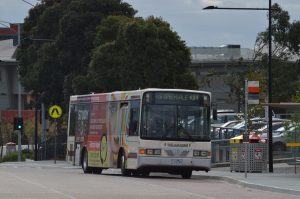 Tullamarine’s Route 477 between Moonee Ponds and Broadmeadows no longer travels via the Peninsula estate on off-peak trips. This change was initially due to take place in mid 2008 (with a start date even publicised via onboard notices), following recommendations made in the Hume/Melton bus review. It was then overruled at the eleventh hour by late transport minster Lynne Kosky. Residents at the southern end of the estate along Rosebud Cres can access SmartBus 901 or 902, plus 484 on Johnstone St.

Weekday services now run to a flat 20 mins headway all day until 1900, previously departing every 15 mins during peak periods and 30 mins interpeak, improving interpeak train connectivity with Craigieburn Line trains on a 20-min cycle. Since 2010 parts of Gladstone Park have been served by SmartBus Routes 901 & 902, reducing residents reliance on the indirect 477 route, which detours via Westmeadows enroute to Broadmeadows.

Timetables have been updated to improve co-ordination with the Craigieburn line, with weekend services increasing from 45 mins to 40 mins to harmonise with the 20 min trains. This change was omitted from the official news items however.