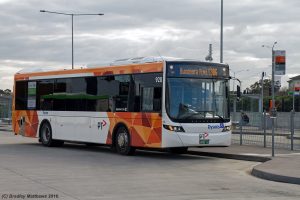 Of the discontinued services, 382 replaces the most of trunk 562 Northland – Whittlesea service, with the connecting 565 service renumbered as 384. 520 from Greensborough is largely replaced by the 385 with north-eastern parts of the Doreen now sorely covered by 381. Route 385 also provides expanded coverage to central Doreen poorly serviced prior to May, with both 381 & 385 serving the catchment of the former 572 in Doreen.

386 & 387 effectively replace 572 through Mernda and Mill Park Lakes, incorporating new coverage. Both routes then operate directly along Plenty Rd to Bundoora RMIT, replacing 572’s former cooks tour of Mill Park, with those along Centenary Dr and Blossom Park Dr now served by 383. The 383 service follows the old 573 within Mill Park Lakes, with a minor change to serve Marymede Catholic College and the site of the proposed train station.

To encourage Mernda commuters to utilise public transport prior to the extension of rail services in 2019, buses on 382, 386 & 387 each operate every 20 minutes during peak periods between Bundoora RMIT & Mernda North. Doreen residents also have access to 20 minute peak frequencies along the 381 to South Morang or 385 to Greensborough. For many this is a boost on the former indirect 520 & 572 services in Doreen and Mernda that only operated every half hour, with Yarrambat and Apollo Parkways residents also enjoying a 33% increase in peak frequencies

Two “Turn up and go” corridors are a highlight of the upgraded network, with a combined 10 min headway at peak times and 20 mins interpeak, early evenings and on weekends, linking to most train services. Unfortunately services cease around 9:30pm each night, so they cannot lay claim to being true Trainlink services.

Together 381 & 382 form one corridor operating along Plenty Rd and McDonalds Rd from the Bridge Inn Rd intersection to South Morang Station. 386 & 387 offer a combined corridor along The Lakes Bvd and Plenty Rd to South Morang Staiton and the 86 tram terminus at Bundoora RMIT. Whittlesea Council and a local advocacy group are pushing for tram services to extend along the latter corridor, with the recent state budget providing funding for a million dollar feasibility study.

To encourage residents to walk further to access more direct trunk corridors, peak services on the 383 only operate half-hourly, however this is an improvement for Mill Park Lakes residents over the old 573 which only operated at 40 min headways. Centenary Dr and Blossom Park Dr residents merely retain the status quo. 383 features school deviations to serve both campuses of Mill Park Secondary College.

Interpeak services of the each of the main routes (381. 382, 383, 385, 386 & 387) operate at 40 min headways, connecting with every second train. This effectively is a downgrade for passengers along the former 520 & 572 services, who previously had two buses an hour, spaced at a 20-40 min frequency. On weekends each of these routes operate every 40 minutes, a gain on the former hourly headways.

Feedback received during consultation resulted in PTV amending their plans to retain a direct link from Whittlesea to South Morang Station and Northland, with the old 562 largely retained with minor changes but renumbered 382. Buses now operate at 40 min intervals across the week, a boost for weekend travellers. Peak shortworkings have been retained between Mernda North & Bundoora RMIT.

Unlike 562 however, 382 accesses Northland more directly along Albert St, bypassing the former East Preston tram terminus – earlier changes made in May saw 567 from Regent re-routed along Tyler St as compensation. Additionally, buses depart South Morang Station via McDonalds Rd rather than via Bush Bvd. Within Whittlesea, 382 services now continue along Oakbank Bvd, Wallan Rd and Black Flat Rd before terminating back in the town centre, a newer part of town previously unserviced.

Those living in the older parts of town in Eastern Hill (near the showgrounds) must transfer to a connecting 384 bus that meets most services, with selected trips also continuing onto the semi-rural locality of Humevale (as did the old 562). As the 384 shuttle also incorporates former 565 Whittlesea – Kinglake trips, there are sometimes gaps of 80 to 90 mins on weekdays to allow the bus to travel some 30km out to Kinglake and back.

Some trips on 384 are operated by the buses outstationed at the Whittlesea yard however on weekends the 384 timetable is largely integrated with the 382 timetable, with most arrivals from Northland doing a “Whittlesea Waltz” around the new north-west loop before heading out to Eastern Hill and then returning back towards South Morang and Northland. While there is very minimal layover as a result, a closer look at the timetable reveals mid-trip dwells at South Morang to meet both train arrivals and departures.

There are now five weekday return trips to Kinglake compared to the former two, however this includes an oddly timed outbound trip from Whittlesea at 0454 which is effectively a dead movement.

The election promise to reinstate a direct connection to Greensborough has been fulfilled by extending every second weekday 385 service from Mernda North providing a 40 min headway during peaks and 80 mins during the day and after 1900. On weekends passengers for Laurimar Town Centre and Greensborough must transfer at Mernda North, with connections of around 10 mins. Rudimentary facilities currently exist at the interchange point, with a lack of footpaths or shelters.

The East-West branded 570 service between Thomastown & Bundoora RMIT also enjoyed upgrades from the same day, with the previous 30 min headway to be boosted to every 20 mins, now harmonised with interpeak trains, while evening services have been extended from 1945 until 2100. Weekend services have been introduced for the first time (40 min headway) while buses now operate through the University Hill complex. An additional bus has been purchased to allow for the upgrade (#936), wearing the traditional red, yellow & white East-West livery. The 570 has returned to the Bundoora depot in conjunction the upgrade after briefly operating from the Reservoir depot.

Announcements in media releases have stated 20 new buses were required to deliver these substantial upgrades, along with the employment of 50 additional drivers. By early August, 18 new deliveries in PTV colours had been accounted for, plus the additional East-West arrival. In the interim, Dysons were noted to use older low floor buses on these routes and the Wollert network introduced in January, including those acquired from Northern Bus Lines and Reservoir Bus Company.

To make room for this fleet increase, 19 buses and 45 drivers based at Bundoora depot relocated to Reservoir depot on 27 June, with a large number of shifts on Routes 508, 513 and 567 affected. It is expected that this arrangement will remain until a replacement depot opens in Epping North in 2018. As reported in the last issue of ABP, the lease agreement with Transdev to house approximately 15 buses for 901 & 902 orbital shifts was terminated effective 5 June, freeing up the required space at the Reservoir depot.