While there are now scarce examples compared to little over a decade ago, a select number of bus routes operated to a reduced weekday timetable in the weeks after Christmas, largely clustered around Moonee Ponds in Melbourne’s north. University shuttles across Melbourne generally operated to either reduced timetables and/or with periods with no service altogether. To cater for beachgoers and holidaymakers on the Mornington Peninsula Route 788 again operated to an increased timetable on weekends and public holidays. 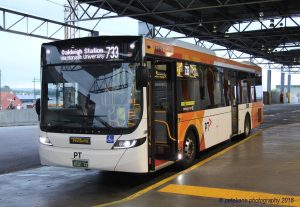 Bus services both in Melbourne and around the state generally ran their usual public holiday patterns on each of the public holidays during the festival period. Two exceptions on Christmas Day holiday saw buses in Warrnambool operate to a Sunday timetable (normally there is no public holiday service) while Horsham residents enjoyed a normal weekday timetable on their town network.

In a bid to reduce the annual parking chaos, Highpoint Shopping Centre again enlisted Sita to operate free shuttle buses from West Footscray and Essendon stations for their 34-hour trade and Boxing Day sales. Buses operated half-hourly instead of the hourly timetable of previous years, although still not harmonised with the existing Ryans’ Route 468 from Essendon departing every 40 mins. On 23 December the shuttles ran 0830 – 2230, on 24 December from 0830 – 1730 and on Boxing Day from 0730 – 2130.

For a third year running Transdev Melbourne provided an enhanced timetable for DART customers travelling between the Manningham area and the City celebrations on New Years’ Eve. Unlike 2014 & 2015 however, services were only extended until 2am rather than right through the night, although Night Bus Routes 961 (Doncaster) and 966 (Box Hill) served the region after the DART routes concluded.

In addition to a more frequent timetable for Routes 905 to 908 (roughly every 15 mins instead of half-hourly), Route 908 was extended to the CBD after 18:30 inbound and after 20:45 outbound, avoiding the need for customers to connect to Route 907 at Doncaster Park+Ride.

Those living along Routes 234 (City – Garden City) & 250 (City – LaTrobe Uni) also enjoyed an extended timetable for the first time – buses ran every 15 mins after 19:00 with last trips leaving the city just before 2am instead of concluding as the clock struck twelve. These areas also had alternative all night options such as the 109 tram along the nearby Port Melbourne Light Rail or Night Bus 955 in Heidelberg West.

Due to issues finding drivers, Transdev was forced to sub-contract shifts to drivers from charter operators Crown and Driver to cover the advertised timetable. Crown has had an ongoing relationship with Transdev, in the past assisting to cover AM school peak trips and providing buses and drivers to cover an ongoing shortage of operational midi vehicles for Routes 280 & 282 (Manningham Mover)

Although no formal celebrations were held along the Mornington Peninsula, the local shire ran a special overnight free service from Sorrento to Safety Beach along Point Nepean Rd using four buses hired from Ventura Rosebud. It is not clear if a reported vandalism spree in Sorrento was a result of the bus service providing a option home for bored teens.

Vicroads, Transurban and the Level Crossing Removal Authority all took advantage of reduced traffic over the summer period to conduct major roadworks across Melbourne. In each case, nearby services also experienced delays due to traffic seeking alternative routes.

From 1900 26 December until 1500 28 December services on Routes 232 (Queen Victoira Market – Altona North) were diverted along Lormier St due to West Gate Fwy works.

Services on Route 220 (Gardenvale – Sunshine) travelled via Sims St and Dynon Rd from 3 January until 8 January due to works on Shepherd Bridge in Footscray.

From 2200 5 January until 1000 8 January SkyBus services were forced to travel along Calder Fwy, Keilor Park Dr & Airport Dr due to works at English St, adding around 20 minutes to the journey – extra buses will in use to maintain the usual headways. Advice from PTV incorrectly stated buses would use the M80 Ring Road despite the lack of ramp access to do so!

Due to the removal of the level crossing at Heatherdale Rd, Heathedale Route 742 (Eastland – Chadstone) is diverting via Molan St and New St from 27 December until 5 February.

Shortworkngs on Route 742 that previously originated at Heatherdale from a peak-hour only stop in Forster St were relocated to the full-time stop on Heatherdale Rd from 3 October in what is believed to be a permanent move.