Westernport Coachlines, part of the Dineen Group, have floated a proposal with the local community and PTV to run a privately funded ‘Xpress’ route between Koo Wee and Fountain Gate Shopping Centre, stopping at Casey Hospital in Berwick (also providing access to the local TAFE and university). 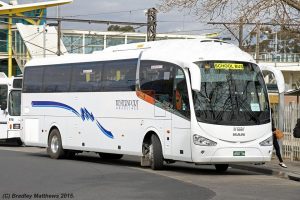 Currently those wishing to travel to Fountain Gate from South Gippsland have access to a weekly Thursday shoppers bus provided by Cleeland Bus Lines originating from Phillip Island, otherwise they must travel via Cranbourne to connect with Route 841 or travel via Pakenham and change again to the hourly Route 926.

The route would operate for an initial three-month trial, with the proposed timetable as follows:

Journey times appeared to be about 45 mins each way. The timetable is designed to allow transfers to the South Gippsland V/Line services at Koo Wee Rup.

They had hoped to commence the service on 19 December 2016 but objections from other local operators (Ventura and Kingston’s) have delayed the proposal – Kingston’s operating the Pakenham route while Ventura operates Routes 841 and 926, the Cowes V/Line trips and a school bus from Koo Wee Rup to various schools in Berwick and Beaconsfield.