By Craig Halsall and Geoff Foster

Ballarat is the latest regional centre to enjoy a major revision to their bus network, with more direct and more frequent services introduced by CDC Ballarat on 29 January alongside a revised V/Line timetable. The bus network upgrade was deferred by 18 months due to funding issues having been originally due to begin in June 2015, in conjunction with the new Regional Rail Link timetable. 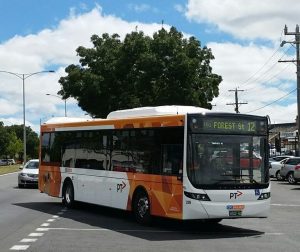 The number of routes has been rationalised from 19 to 15, as follows:

10 (Ballarat – Alfredton via Wendouree): Replaces former route 1 along Howitt Street, then via Forest and Norman Streets to the Wendouree Village shops then via former route 16 in Lake Gardens (but directly along Gillies Street North) and then along former route 15 along Sturt Street. Wendouree Station is served on trips into the city but not outbound where passengers must walk to Gillies Street. Operates hourly Mondays-Saturdays and every 90 minutes on Sundays. Last buses are at 19.02 weekdays (was 19.10 Mon-Thu and 21.05 Fridays), 17.26 Saturdays (was 18.05) and just 15.53 on Sundays (was 16.15).

14 (Ballarat – Black Hill): Replaces the Humffray Street section of former route 7 (Brown Hill) then via Chisholm Street to Black Hill with a revised and simplified outer end loop of former route 5 but with more bi-directional operation. Operates half hourly on weekdays and hourly on weekends. Last buses are 20.12 weekdays (was 19.05), 17.12 Saturdays (was 18.00) and 17.12 Sundays (previously no service).

15 (Ballarat – Brown Hill): Replaces former route 7 with expanded coverage in the outer part of Brown Hill and now omits part of Victoria Street instead diverting via the Museum of Australian Democracy at Eureka along a small section of former routes 8 & 9. Operates every 30 minutes on weekdays and hourly on weekends. Last buses are 18.26 weekdays (was 17.50 Mon-Thu and 20.50 Fridays), 17.10 Saturdays (was 17.50) and 15.10 Sundays (was just two trips the last at 15.45).

25 (Ballarat – Delacombe): Travels via Pleasant Street to Sebastopol over former route 13 then to the western part of Delacombe over former route 14 in Delacombe along with much of the route 13 loop through south-west Delacombe, improving local access to the new Delacombe Town Centre. Operates half hourly Mondays-Saturdays and hourly on Sundays. Last buses are 19.04 weekdays (was 18.55 Mon-Thu and 21.05 Fridays)); 16.49 Saturdays (was 17.50) and 15.19 Sundays (was 17.00).

26 (Ballarat – Alfredton): Replaces former route 18 with greater coverage west of Alfredton Primary School and with a small section enabling transfers to or from route 10. Operates half hourly on weekdays and hourly on weekends. Last buses are at 19.04 weekdays (was 18.40 Mon-Thu and 20.35 Fridays); 19.01 Saturdays (was 18.35) and 17.01 Sundays (previously no service). The public map shows the outer loop as operating anti-clockwise via Jarrah Drive, Chase Boulevard then Dyson and Cuthberts Rds. Buses actually run this way. However the map on the timetable shows the loop operating in the reverse direction.

Confusing and poorly documented through-routing in Ballarat has been eliminated, which had failed to make it clear most routes served the station (as they were passing the station showing the number of the through-routed service). A consistent operating pattern has been introduced, with buses on all routes now heading to the station. Inbound buses travel along Curtis Street while all outbound trips operate via Little Bridge Street.

Wendouree and Alfredton residents benefit from enhanced access to their local Wendouree station (opened on 12 June 2009), which is now directly served by routes 10, 11, 12 & 31, compared to just route 17 under the former network. Other routes had run nearby but failed to call at the station, and in some cases (such as route 2) the nearest stop was up to a 15 min walk away.

In a related win, Wendouree Station gains more weekend trains from 29 January, eliminating gaps of over 5 hours when trains had originated or terminated at Ballarat.

Bus frequencies have been standardised to clockface headways, though they change slightly around lunchtime on some routes, but there is little consistency of service levels between routes as per the descriptions above.

In particular, the hourly and 90 min Sunday services are significant increase – it was common for Ballarat routes to operate just 3 or 4 trips across the day, using a limited number of vehicles.

Further investigation has highlighted a significant reduction of overall span in comparison to the proceeding timetables, although some routes do enjoy some later trips or little change on some days. Below are some examples. The removal of Friday night services on trunk routes is a particular loss, as it will limit options to enjoy late night shopping, after work drinks, dinners out, school fetes etc.

The proposed introduction of a new regional numbering system with town-prefixes (eg B24) to avoid conflicts between different towns (thus improving search results on the PTV website & app) discussed last during the Ballarat consultation last year has not gone ahead.

Geoff Foster spent a day in Ballarat sampling the new services. My observations are as follows:

The grouping of services in the main shopping precinct was also causing some confusion in the first week. All services to the station now use Curtis Street whilst all outbound services now use Little Bridge Street which seems an intelligent approach. However route 15 to Brown Hill and 20 to Canadian actually pass both locations in both directions which necessitates looping around and adds several minutes of travel time to these routes but does, however, maintain the advertised consistency of stops. A few intending passengers at Curtis Street needed redirecting to Little Bridge Street.

A couple of routes which used to service the Myer stop (e.g 10 to Wendouree/ Alfredton) no longer do so with concerned passengers observed waving at buses which were already over in the right lane for their approaching right hand turns.

Some riding of routes revealed that timetables are now generous on most routes with outbound buses having to stop once or twice for the timetable to catch up and some quite early arrivals at outer termini (nearly 10 minutes in one case!). Route 15 to Brown Hill was an exception with the bus slightly behind time for most of the outbound journey and only enough layover time at the outer end for a very quick photo! As weekend timings appear to be the same as for weekdays this should eliminate the previous significant late running of Sunday services that I had experienced on several occasions in the past.

Drivers had been supplied with new maps etc for their guidance and this seemed to work well. One exception was the route 10 outbound bus which missed one stop. But then again how often do you have to do a right hand turn which involves diving across two lanes to enter the service road? Interestingly the route rejoins the main road for the next stop then dives back into the service road for the following one. Ugh.

CDC had stationed their specially equipped customer service vehicle in Ballarat for the week, alternating between the railway station and the Little Bridge Street interchange. It seemed to be doing steady business distributing maps and timetables. In addition, customer service staff positioned at several of the main city stops appeared to be much in demand.

CDC organised and, to their great credit, publicised the required 14 bus movement between the Werribee and Ballarat depots on Friday 27 January. The 14th bus in the convoy was former Eastrans/ Driver (9) Volvo B10M/ Volgren which has been converted to an information and special events unit as noted above.

Several enthusiasts observed the convoy at various points, with two following the whole route. Both CDC and Scania had photographers present including a drone crew who obtained some stunning ariel footage used later on the CDC Victoria website. Local television was present at the Ballarat depot to record events.