SkyBus continues to grow their Melbourne operation, announcing in mid-December 2016 that they have purchased Sita’s Avalon Airport Shuttle route, with the handover to taking place on 1 February 2017. 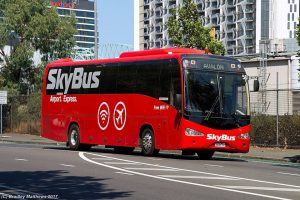 Sita have operated the service since commercial flights at the airport took off in June 2004, initially under their (since sold) Sunbus Airport Transfers brand. SkyBus had the route in their sights in 2004, and made a premature announcement they intended to serve Avalon before the Victorian Government awarded the route to Sunbus/Sita.

The existing service level was maintained, meeting all Jetstar flights.

A key change however is the existing SkyBus hotel transfer service will ferry passengers into Southern Cross, rather than the coach operating via CBD hotels as is the case with Sita. The stop at Werribee RSL is being retained but will no longer require pre-bookings for travel towards Avalon.

Fares remain at $22 one-way and $42 return but free travel will now be available for children as is already the case on the City – Tullamarine Airport route.