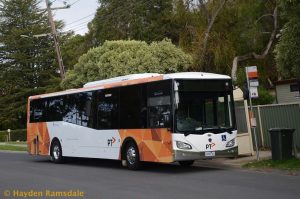 The long anticipated upgrade to town bus services in the West Gippsland towns of Warragul and Drouin finally commenced on 14 May 2017. The new network was originally due to be implemented in 2010 following planning and community engagement at the time but a lack of funding saw the plans shelved by successive state governments until further consultation took place mid 2016. The Dineen Group has hired seven to eight new drivers for their expanded Warragul Bus Lines operation.

The previous town bus offering in Warragul was extremely poor for an increasing population that now exceeds 15,000. Former Routes 1, 2 & 3 ran a mere three interpeak trips each between 0900 & 1430 on weekdays, with Route 4 operating just twice. General Manager of local operator Warragul Bus Lines’ Philip Radford was highly critical of the old network in local media in the past, stating new residents often complained there was no buses and depot staff often having to field phone calls that there was no return bus at the time a potential passenger wanted to travel home.

Under the improved network hourly timetables are now provided, with a longer span from 0600 to 1645 weekdays and for the first time, between 0900 and 1700 on weekends and public holidays. Unfortunately, it’s believed a funding shortfall resulted in services finishing well before commuters return from jobs and study in Melbourne, the south-east suburbs or Traralgon – on some routes, last buses depart town as early as 1607 on weekdays, despite original plans for a 2000 finsih.

Coverage across Warragul has been expanded considerably, with the following routes now operating, each radiating from the station: 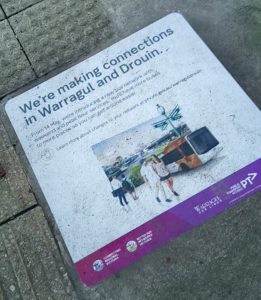 Route 82 (Warragul North):
Replacing most of former Route 1, this route now serves more of the north-eastern parts of town, with buses now running along Stoddarts Rd rather than the northern part of Normanby St. The revised route also now incorporates the southern portion of Normanby St, catchment previously part of Route 2.

Each route travels via Warragul Shopping Centre after departing the station and again before terminating back there, as does Route 85 to Drouin (as below).

Nearby Drouin, 90km east of Melbourne, previously held the title as the largest centre in the state without a town bus service, with its population more than doubling in the past 25 years, now nudging 10,000. This unwanted title has now been lost with the addition of new Routes 85 & 86, operating either side of the railway line. 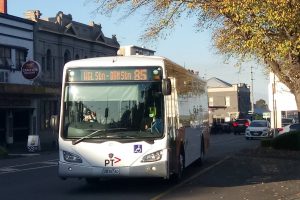 Route 85 (Warragul – Drouin – Drouin South)
Route 85 is a dual-purpose route – other than supplementing the V/Line train service between Warragul and Drouin, it provides access to the new housing estates springing up in the 7.5km corridor between both towns, along with coverage to those living in Drouin South for the first time.

Route 85 supplements the existing “West Gippsland Transit” intertown service, which parallels the rail corridor between Pakenham and Traralgon. The timetable for the longer intertown service remains unchanged and continues to operate to a quite erratic limited timetable on weekdays and Saturday mornings.

(The intertown route incorporates various V/Line coach trips on the Traralgon line, although at the time of writing the full timetable has incorrectly been deleted from the PTV website, and can only be found on the Warragul Bus Lines website).

Passengers travelling between Warragul and Drouin on weekdays now have access to 37 daily trips in either direction, consisting of:

One oversight though is the route fails to travel along Jacksons Dr, ignoring residents moving into the growing Jacksons View estate. A revision of the route to incorporate this housing development would be expected within the next few years.

During consultation it was proposed that Route 86 would travel into Warragul, however ultimately trips have been confined locally. On Weekdays it is possible to transfer to the 85 when heading east, although unfortunately the timetables don’t line-up for those heading back from Warragul or on Saturdays. This is understandable as the out & back travel time around Drouin for Route 86 is double that of Route 85.

Route 89 (Warragul to Noojee)
Further afield, the Noojee to Warragul bus, operating two return trips on weekdays, maintains its existing timetable as a non-myki service, but now operates as Route 89 instead of Route 5.

Warragul to Poowong East
The Thursday return shopper bus from Poowong East to Warragul continues to operate as a unnumbered non-myki service, but like the “West Gippsland Transit” intertown route, the timetable has also been incorrectly removed from the PTV website. 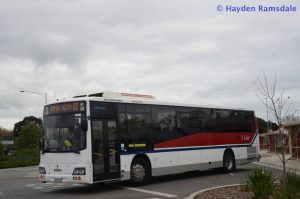 Bus Stops
In conjunction with the new network, the familiar orange PTV signage has finally rolled out along each route. As is often the case when new routes are introduced, some homeowners grumbled to the local paper and local members of parliament about having stops elected outside their homes, which will include a concrete hardstand area and tactiles at a later stage.