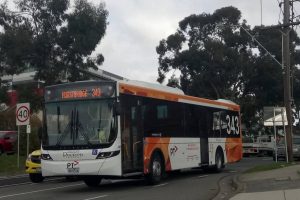 As part of the as part of the Hurstbridge Line upgrade funded in the 2016/2017 state budget, a new parallel bus service, Route 343, will be introduced on 19 June.

The service, operated by the Dineen Group’s Panorama operation, was initially designed to provide residents of the outer suburb Diamond Creek and the townships Wattle Glen and Hurstbridge additional public transport links, which are not achievable due to the current single track (with passing loops) beyond Greensborough.

Operating weekdays only, Route 343 departs at 20 min intervals during the peaks and every 40 mins interpeak. The PM peak is followed by 40 and 70 min gaps with the last departure leaving Greensborough at 2056.

The route travels via St Helena following community consultation last year that saw 51% of 840 respondents preferring this option, with better access to local community facilities, than a quicker option along Diamond Creek Rd, as originally intended.

Unfortunately, the longer route and runtime has botched the interpeak timetable – while buses towards Hurstbridge are off-set with the trains (providing an average 20 min headway), return trips towards Greensborough merely meet City trains originating from Hurstbridge. This is unavoidable without horribly long layovers – had the trip been slightly faster, it would be possible to off-set trips in both directions. 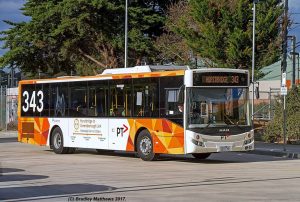 Other aspects of the Hurstbridge Line upgrade underway include grade separations at Grange Rd, Alphington and Lower Plenty Rd, Rosanna, a new evaluated station at Rosanna plus the long overdue duplication of the single track between Heidelberg and Rosanna.