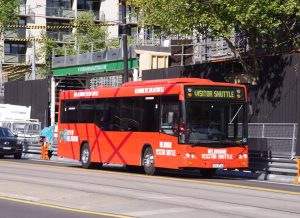 At their May meeting Melbourne City Council councilors voted to withdraw funding for the Melbourne City Visitor shuttle, with services to conclude at the end of August, citing dramatic falls in patronage.

The service, which commenced in February 2006, ahead of the Commonwealth Games, was initially operated by Ventura from their then Nationalbus depot in North Fitzroy. Driver Bus Lines were successful in winning a longer three-year contract from September 2007 when the service was retendered – the service being an ideal pairing with Driver’s regional Grayline sightseeing day tours. The contract was subsequently extended to 2012 and then 2017.

The service was funded by a CBD carpark congestion levy introduced by the state government in 2005, and was free during its early years, which often led to overcrowding on its half-hour timetable.

At start of 2013 a $5 fare was introduced, making up for a $500,000 shortfall in operating costs after the levy contribution was capped at $800,000 in 2009. This $5 fare was later replaced with a $10 two-day ticket in July 2015.
Private operator City Sightseeing introduced their own tourist loop service in May 2013, operated using semi-open top double-decker vehicles, fragmenting the potential tourist market, despite charging premium fares of $35 for 24 hours or $45 for 48 hours.

The addition of the free tram zone in 2015 was the final nail in the coffin for the once popular service.

With the closure of the route sees the end of another era for Driver, as they will no longer operate a traditional “hop-on, hop off” passenger service in any form, the legacy the company was formed upon in 1931. This follows the previous sale of the main route operation to CDC Victoria in July 2013. They will continue to operate school buses across Melbourne’s east, south-east and Mornington Peninsula, preform charter work and operate the popular Gray Line sightseeing tours.