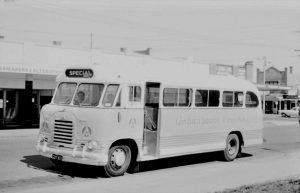 Ambassador Coaches revived the abandoned Caulfield to Ormond and Bentleigh via Grange and Jasper Roads Route 62A (later 628) in 1970. Three CAC Bedfords were purchased second hand (from Whitehorse, Red Cross and Boronia) and painted in an attractive livery of lime green with white roof from memory.

The reborn service did not survive for long and the buses were all sold to a dealer in June 1973.

This route was started in October 1928 as the 62A, Caulfield to Ormond via Grange Rd, by J. Lawless and it was sold to Laidlaw Bros. in 1932. It passed to the Fiske Bros who operated two Grummit bodied Fords and Grummit bodied Reo on the services, in the 1950s.

On 1 January 1953, the route was linked to the 97A under the proprietorship of E. Lishman and O. Shave to run St Kilda – Caulfield – Ormond but the merger did not last; in August 1953 Lishman was the sole operator of 62A. Lishman died in 1954 and the service was sold to G. Rosevear in October 1955. J. Close and W. Brown took over the route in May 1956 and by 1961 the partnership had become J. Close and E. Davidson. 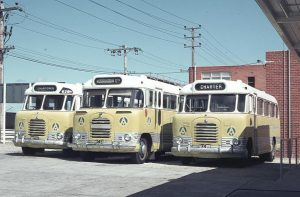 Extension to Bentleigh via Jasper Rd was granted in May 1963 when the service was being run by G.F. & P.G. Elston and it passed to Southland Bus Service in 1965. The service was abandoned on 1 May 1970 but was reopened by J & D Donnelly, trading as Ambassador Coaches.

An application to extend the service to Southland Shopping Centre was held in 1971 when the route was renumbered 628 but an extension to Moorabbin Station only was given in September 1972. The route was finally abandoned on 24 August 1973, running just hourly on its demise. Ambassador used SB Bedfords with curtains at the window and issued the paper punch tickets distributed by the Bus Sales organization.