Henry Frederick Suhr was originally a market gardener and was born in Daylesford in 1869. Henry’s father was born in Denmark and his mother in Galway, Ireland. Henry Suhr’s involvement in buses began in 1925 with routes 32A and 34A and eventually operated under the business name Arrow Motors. The family lived at 729 Hampton Street, Brighton, on the corner of Peacock Street. This was also the site of the original depot. 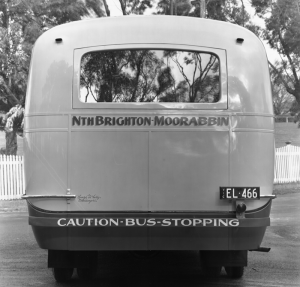 The only photo we have of an Arrow Motors vehicle is this rear view of a Ford from the State Library of Victoria archives.

The house was built in 1925 having been a vacant block beforehand. It was originally numbered 95 in 1925, then 377 in the 30s and then 729. The granddaughter of Henry Suhr (Edna Hatch, nee Dannock) lived at this address until 2015 when the house was demolished.

From North Brighton to Bentleigh

Route 32A originally ran from North Brighton Railway Station via Bay Street and Point Nepean Road to Centre Road with a single bus. By 1931, it had reached Nicholson Street, Bentleigh and by 1934 East Boundary Road with 2 buses on the route. After the war, it was extended through to Oakleigh with 6 buses and then 8 buses in 1948 and by 1952, 9 buses. Each bus had its own licence, and the number of licences were strictly controlled first, by the Melbourne City Council and then, after 1952, by the Transport Regulation Board.

The livery on buses on route 32A was originally said to have been red and silver. Over the years, it became what was described as “Landsford red” with a cream roof and white band. “Landsford red” was a type of rouge-brown which, like most early paints, faded fairly quickly. 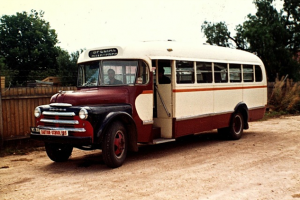 Henry Suhr died in 1942 and two of his sons, Henry Roy Suhr (known as Roy) b.1900 and Leo Thomas Suhr b.1903, continued to run the business. He also had four other children; Eric b. 1896, Nellie (mother of Edna) b.1894, Beatrice b. 1897 and her sister, Mildred (Meg) b.1905. They were all born in Essendon and lived in Buckley Street before the family moved to Brighton.  Arrow Motor Service also held a number of taxi licences at the time and may have had a physical presence in the strip in Hampton Street between Dendy Street and Marriage Road.

Leo Suhr purchased a new depot in Centre Road on the corner of Wheatley Road probably around the time that the route was extended to Oakleigh.

By this stage, the licensed operators were Leo T Suhr with 7 buses and Dendy Omnibuses (H Roy Suhr) with 2 buses. (Dendy Street was just near the original family home.) Later, a company called Landsford Motors (according to Brian Suhr, named after L T Suhr and S Quint) operated with Dendy Omnibuses. After the death of Roy Suhr, it was just changed to Bentleigh Bus Lines. In 1971, the route was renumbered 632 and remained unaltered whilst owned by the Suhr family. 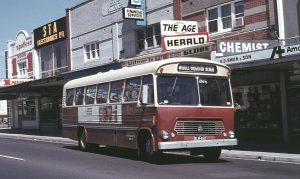 Seen passing through Bentleigh shops on its way to Middle Brighton is Landsford Motors KLM 682 a Bedford SB5 / Comair new in 1969. (Bruce Tilley).

Route 34A also began at North Brighton Railway Station and travelled via Bay Road and Hampton Street, initially to South Road with 2 buses and then 11/25 to Hampton Railway Station with three buses. It was extended to Beach Road 7/31. The 34A went to Lew Page in 9/54. It is thought that the livery on these buses was cream and turquoise and later cream and green.

Route 63A began 11/38 as East Brighton Tram to Middle Brighton with 2 buses. Nuline purchased the 63A in 8/51. Once again, the livery on this service is unknown, except to say that the regulators at the time expressed a preference for different liveries on different routes even if they were owned by the same company. The routes of buses were also written along the waist of the buses just below the windows. Buses were strictly licensed to the one route however, on some occasions, a bus from a different route would be drafted into services if the regular bus was otherwise “indisposed”. Upon acquisition by Nuline, two CAC Bedford OBs went with the sale.

Route 102A began 2/40 and was North Brighton Station to Moorabbin Station with 1 bus, which was increased to 3 buses by 1952. It was sold to Don Aplin in 7/53. The buses on this route were cream with green details. Two were Fords with Symons & Fowler bodies which were joined by a CAC bodied Bedford OB. 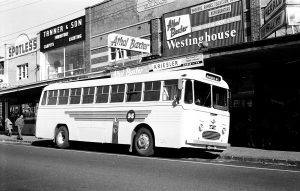 Smith & Suhr GWP 750 was one of three Freighter Lawton monobuses purchased for the Suhr fleets in the late 1950s. (John Masterton)

In July 1947, L T Suhr began Route 120A as Bentleigh Station to South Bentleigh (Talbot Avenue). It was soon extended to Jasper Road via Patterson Road and Station with 2 buses. By 1952, it was extended to East Boundary Road. Norm Smith became a partner in the 50s and the route was further extended to Bignell Road in January 1964 and operated under the name of Smith & Suhr. The livery of these buses was mushroom pink (or mauve) with a pale green roof, “Landsford red” line and a green flash.

In 1971, the route was renumbered 635. It was eventually extended to Cochranes Road via Alex Avenue in Moorabbin East, but this was cut back to Normanby Road in East Bentleigh in later years.

The early buses were Federals with Grummet bodies. From the early 40s, normal control Fords with Symons & Fowler bodies were purchased, some of which lasted into the late 50s. At the end of the 40s, the CAC OB Bedfords (like the Fords, usually fitted with Perkins diesels) became the bus of choice. They were the 27 seat version. There was some experimentation around 1950 with a Symons & Fowler bodied Vulcan purchased by Landsford Motors and then in 1951, a Grummet bodied Leyland Comet was purchased by Dendy Omnibuses. 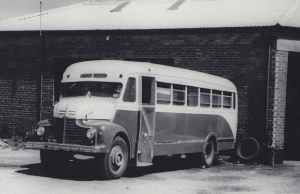 VL 500, an early 1950s bonneted Leyland Comet with a Grummet body was one of the units in the Dendy Omnibuses fleet. (Keith Kings)

This bus received a full front when it was sold to Doug Barnes in 1960 and saw further service with Kastoria.

After that, the companies returned to CAC for flat screen SB Bedfords, which were all petrol. In 1958, each of the three operating companies purchased a Freighter Lawton Monobus which were being made at the Freighter Moorabbin plant. They had a single door and maintained their original Commer TS3 engine until all were sold in 1964. This was a big step up on bus size and cost. The buses were licensed to carry 37 seats in perimeter format, up from the 29 in the SBs. The cost of the Monobus was £6,215 whereas the cost of the CAC Bedford at the time was £3,960. Despite the best of intentions, the Monobus turned out to be a costly failure for both Freighter Lawton and the dozen or so operators who purchased them, mainly because of the underpowered engine. Most were subsequently repowered, often with second owners. 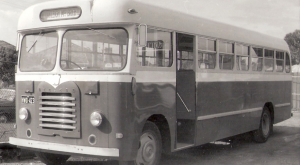 HWO 423 a 1963 Bedford SB3 was one of several buses to be bodied for the Suhr family by local body builder Roy Piper. (John Masterton)

In the 60s, petrol Bedfords continued to be purchased, first on Comeng and R V Piper bodies and then on CAC (Comair bodies). Piper, who was just up Centre Road at the Ventura depot, also bodied the sole Atkinson in the fleet in 1963. This Alpha chassis had come into the country in CKD form in 1959 and had been waiting for a buyer.

The Comair Bedford purchased in September 1964 for Smith & Suhr, saw a return to diesel engines with the Bedford SB5. This and subsequent Comair Bedford SB5s formed the backbone of the company’s operations for the next two decades. 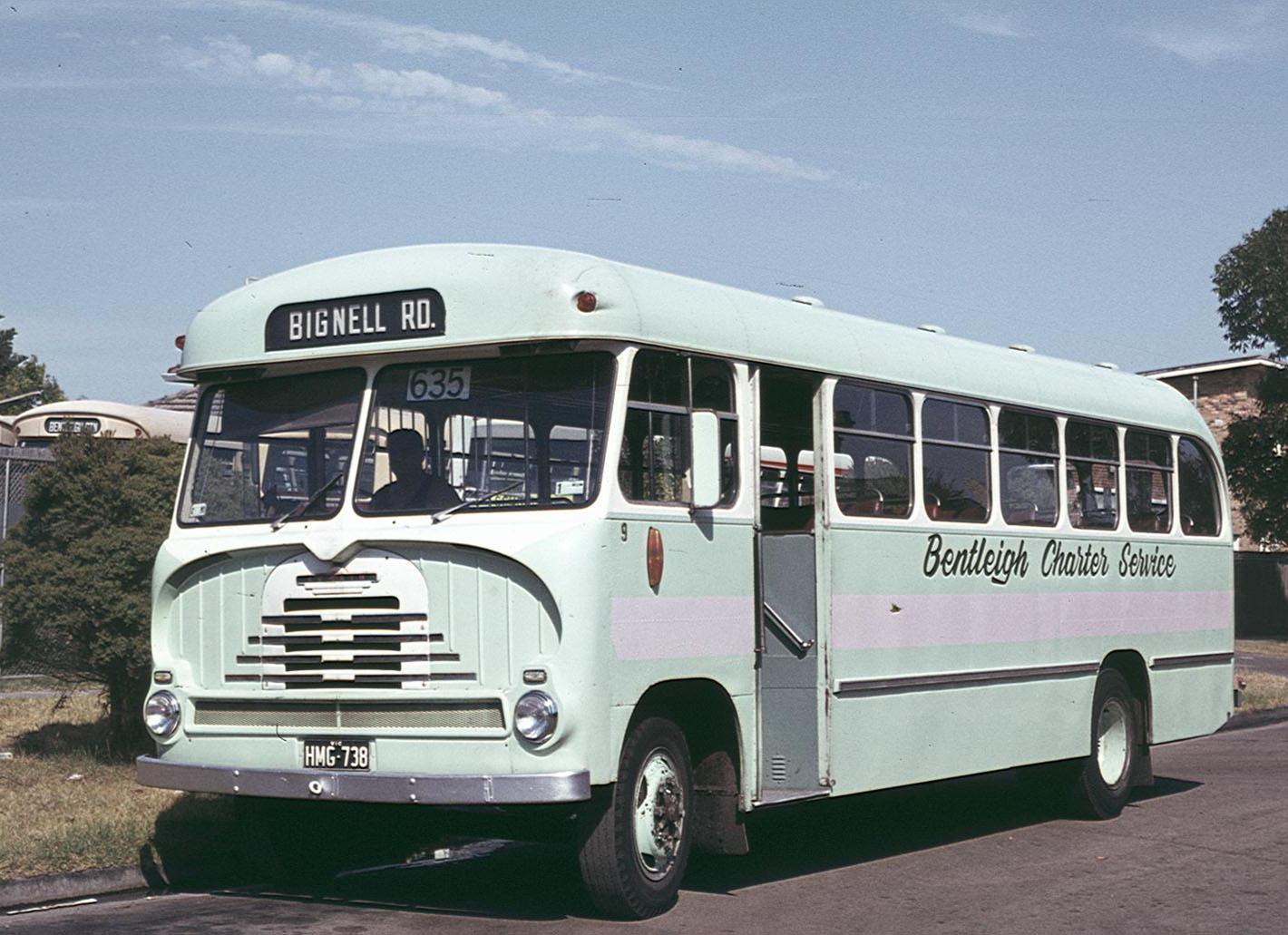 HMG 738 a 1961 Bedford SB3/ Comair was one of the regular buses on the Bentleigh to South Bentleigh run for many years and shows the green and mauve livery. (Bruce Tilley)

The Smith & Suhr company operated a few charter buses over the years, usually CAC petrol Bedfords. In 1969 and 1970, these were upgraded with the purchase of two Comair VAM70 buses. A rare CVI (Comeng Vehicle Industries bodied VAM70 was purchased from Collins Radio in Fyshwick ACT in 1972. This was followed by a new Freighter bodied VAM70 (UF) in 1973. Most of the fleet acquisitions in the 70s were for the charter business. This was evidenced by the purchase of Domino Hedges bodied GM in 1978 ex stock and a Duple bodied Bedford YMT3 in 1979 also ex stock. A new Centurion bodied Hancock arrived in 1983 for charter work – a unique bus. 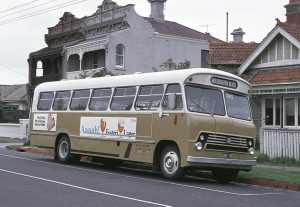 JWY 759, a 1967 Bedford SB5/ Comair in the later light brown livery is seen at Brighton Beach laying over between trips on Route 632. (Bruce Tilley)

Meanwhile for route service, after CAC ceased building bus bodies, a lone Domino Hedges bodied SB5 was purchased in 1978. A Centurion bodied International 1810 was bought in 1981. Finally, the company turned to the PMC Elwood and received five from 1983 to 1987. 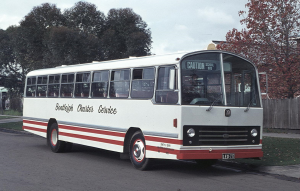 A unique vehicle for Melbourne was Bentleigh Bus Lines LED 777 a 1970 Bedford VAM70 with Commercial Vehicle Industries “sausage” style bodywork. It was acquired for the Smith & Suhr charter fleet from Collins Radios in Canberra in 1972. (Bruce Tilley) 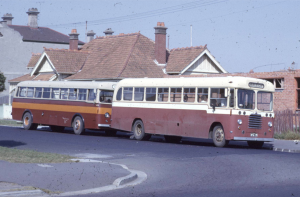 Middle Brighton was the meeting point for services of Nuline, Melbourne-Brighton and Landsford. Seen here in 1969 is a Landsford Motors Piper bodied Bedford SB3 in front of one of Nuline’s AEC Reliances. (Neil Mackintosh) 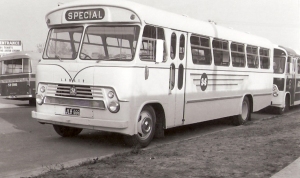 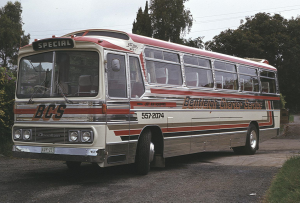 One of the charter coaches bought during the 1970s was ADP 231, a rather pleasant looking Domino Hedges bodied Domino Starliner-GM chassis. (Bruce Tilley) 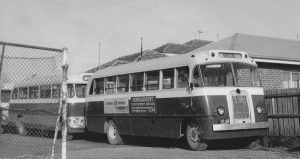 SP 606, the unique Vulcan with Symons & Fowler body is parked in the depot drive of Landsford Motors with a flat screen CAC behind it. (John Masterton) 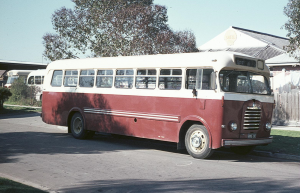 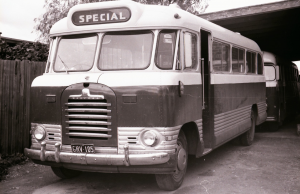 During the 1950s the Suhr fleets were populated largely by CAC bodied Bedfords. GRV 105 a flat screen Bedford SB / CAC is seen at the depot. (Bruce Tilley) 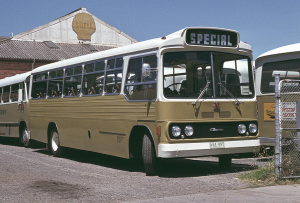 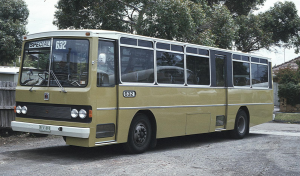 After the withdrawal of the Bedford from the local market the next marque tried was International. New in 1981 was BEV 894 an 1810 model chassis with Perkins engine, Allison auto and a Centurion body. (Bruce Tilley) 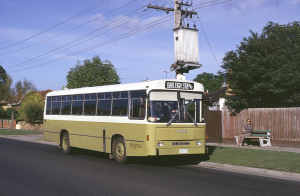 With a Melbourne wide move to purchasing from a pre-selected set of bodies and chassis from the mid 1980s, the Suhr family adopted the locally designed Elwood bus bodied by PMCSA. The first of these was CSQ 312, new in 1985. (Bruce Tilley)