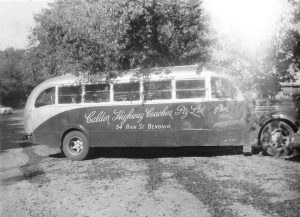 An early Calder Coaches acquisition, a Ford V8 with Ansair body bought from from Provincial Roadways, lays over under some shade between services (John Masterton photo).

Murray Valley Coaches was a renowned coach company formed in the 1930’s, headquartered in Mildura, which by the early 50’s had an extensive network of service offerings, primarily centring around long distance (regular) coach services and tours. With advances in technology and manufacturing processes for heavy vehicles, decreased journey times and increased passenger comfort was suddenly achievable. All this meant many far places were now reachable and widely accessible within a day or two, resulting in a surge in demand for long distance passenger coach services. Murray Valley Coaches capitalised on these new opportunities in 1945 when they began operating regular coach services between Bendigo and Mildura.

By the late 40’s, the route was just a small portion of an expansive network, with frequent services from Mildura to Adelaide, Canberra and Sydney, amongst others. However, with the rise of popularity in the motor car in the early 50’s (due to increased affordability), the company began to experience financial hardship. This saw the sale of the Bendigo – Mildura route on July 1st, 1954 to three drivers; Colin Symes, W.A. Runnalls and Doug Bennetts. 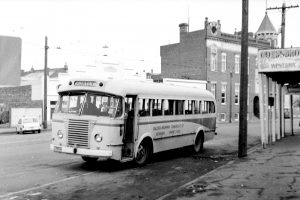 HEN 072, a 1960 model Ford QFC with a Symons & Fowler body, lays over on High St prior to commencing a Huntly urban service. This bus was secondhand to Calder, coming from Morphett, Adelaide (Bruce Tilley photo).

Together these three formed Calder Highway Coaches, establishing a depot at 54 High Street/Chapel Street, Bendigo. Over the next 28 years, Calder Coaches built up a deeply established and reputable operation in the Bendigo region, comprising of extensive service offerings, and an equally impressive premier class, renowned fleet. At it’s peak, the company offered Urban, School, and Charter services, alongside an extensive interstate tours program.

Calder Coaches’ growth was kick started when they began operating the urban service from Huntly – Epsom – White Hills to Bendigo at some stage in the mid to late 50’s (the first new bus bought new for this service was a ‘57 build). With increased revenue, the company went on to purchase the Bendigo to Sea Lake stage service from Ansett’s Provincial Roadways in 1959, and the Bendigo to Ballarat stage service (also from Provincial Roadways) in 1966.

At some stage in the mid to late 60’s, the company was acquired, or came to be owned, by Ted and Florence Hamley. In 1968, the Hamley’s, their daughter Joyce and her husband Alan jointly purchased the bus services from Alf Bentley (Bentley’s Motors) in Castlemaine, renaming the business ‘Castlemaine Bus Lines’. Despite this, both companies remained entirely separate, both legally and operationally. 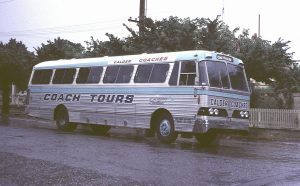 Seen here is KJU 958, an Albion Viking VK43L with a Denning body of September 1966. The bus came to Calder from Redline, Tasmania (Bruce Tilley photo).

However by 1972 the bus rationalisation program was widely in place across the state, and following the withdrawal of SEC tramway services in Bendigo, a new network of bus services (and subsequently new bus contracts) were developed. This ultimately saw Calder Coaches loose operating rights of the Huntly service to Walkers Bus Service. To rub further salt in the wound, the formation of VicRail in 1974 oversaw the integration and rationalisation of remaining country coach services into a combined rail/bus network. This saw a number of changes to these services, but namely, the introduction of new bus contracts, which Calder Coaches (again) failed to retain, probably in order to consolidate their operations towards the largest and most profitable portion of the company – the tour market.

With the loss of the various services, and the intensive vehicle replacement program (for the tour coaches), numerous vehicles were cascaded down to the Castlemaine fleet, ending up as school vehicles.

LUW 865, an Albion Viking VK43L with a Superior body of 1971 is seen on school charter duties outside of the old Golden Square High School. The bus was later sold to Noel Storey with the Strathfieldsaye school run (Bruce Tilley photo).

By the mid 1970’s, the company had obtained four school runs, operated around 12 (known) vehicles, and was in the process of relocating to a purpose built depot facility in Wood Street, Bendigo (now Bendigo Coachlines’ premises). But by around the turn of the decade Calder were to again downsize, with the Hamley’s selling the Bendigo to Sedgwick school service was to Burtonclay, and the Bendigo to Strathfieldsaye service to Noel Storey. Not long thereafter the remaining Calder business including remaining coaches, along with the private Girton College to Castlemaine school run, were sold to Castlemaine Bus Lines, with the Hamley’s retaining the sole Goornong school run (and bus). 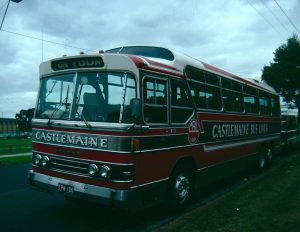 IPW 104, a 1975 Denning GM Mono is seen later in 1986 adorning the Castlemaine livery. The vehicle was sold with the remaining Calder business some 4 years earlier (Peter Kane photo).

Between 1985 and 1987, the four ex Calder Denning Monocoaches were progressively painted into Castlemaine’s livery, with the extended charter and touring business incorporated into ‘CBL Tours’, under the Castlemaine banner.

If you feel you have any more information that can be added to this article, or notice any factual discrepancies, please contact us through vm@bcsv.org.au 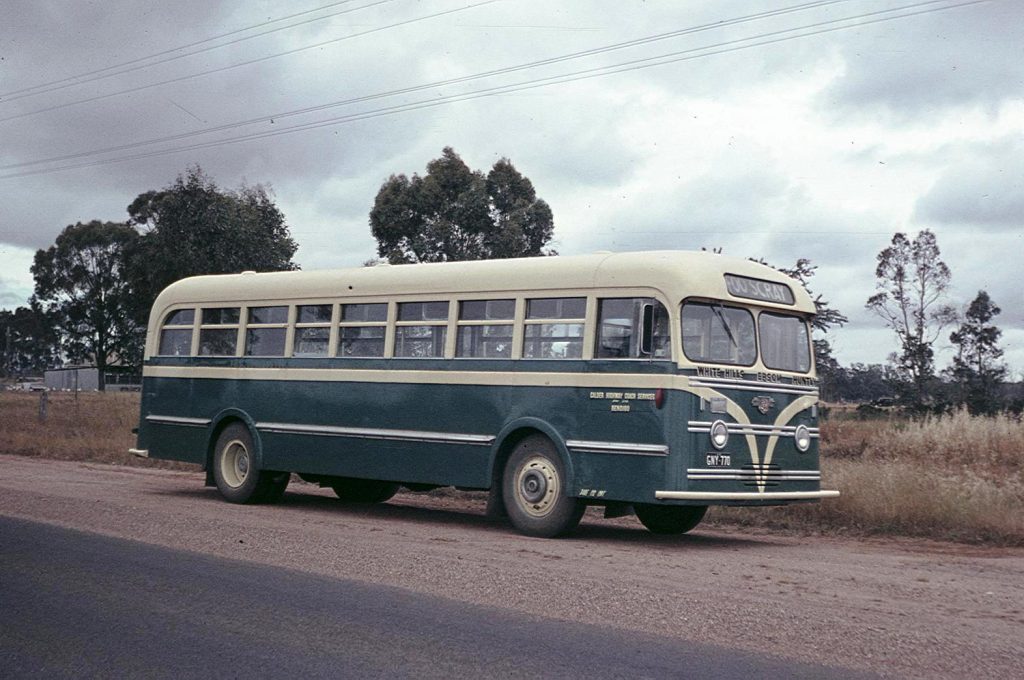 Resting here is a Syd Wood bodied Leyland Tiger Cub that was new to Paul Walshe for the Footscray – East Melbourne route (then the route 38 now the 402), on 6/9/56, and registered GNY 770 . It went to Calder Hwy Coaches for their route service in Bendigo, Huntly- Epsom – White Hills, in April 1968. When B M Walker acquired the route service in May 1972, the bus went with the sale and was painted into Walker’s red and cream livery. It was deregistered and sold to the wreckers in 1973 (Bruce Tilley Photo). 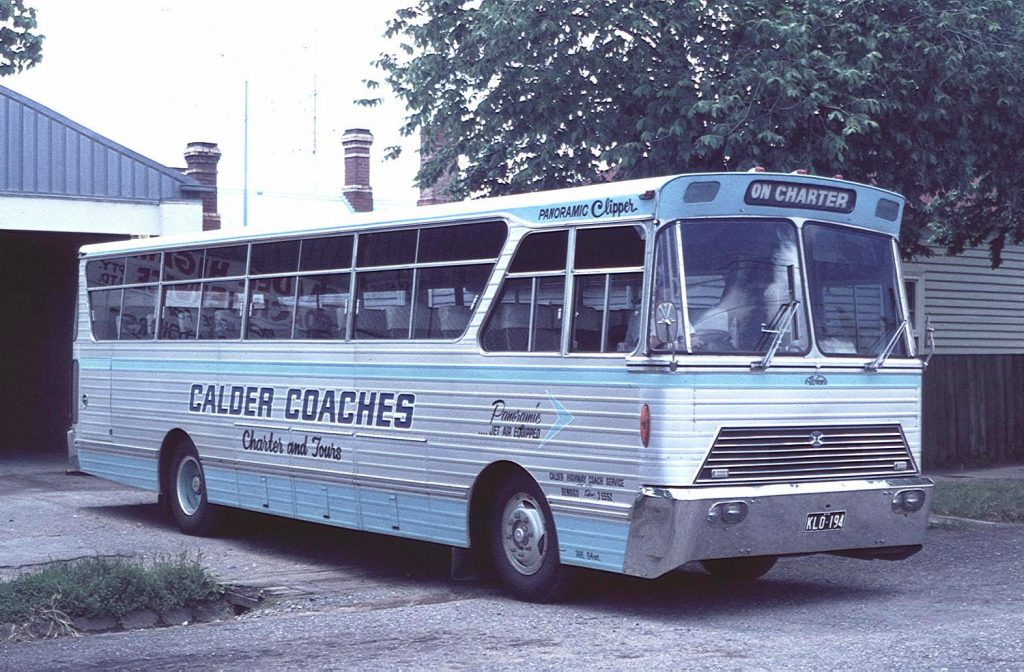 Resting at the depot off duty is Denning bodied Albion VK43L that was new to Blackstone Busways of Ipswich (Qld) in August 1967. It came to Calder Coaches on 12/1/70 where it was registered KLO 194. Following its replacement in the touring fleet, this bus was downgraded to school duties on the Bendigo – Sedgwick school service (Bruce Tilley photo).