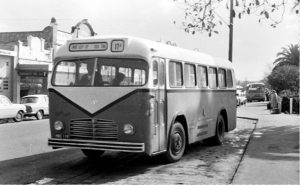 HMD 119 is seen at Essendon Stn in 1967. One of three Fleetlines in this small fleet. The route along Buckley St was only about 2.5 kilometres long, but after sale to Ryan Bros, the route was extended to Keilor Park in the 1980s. 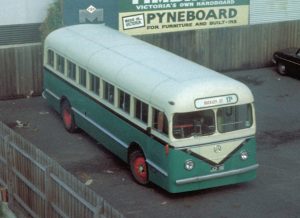 Hill’s JGD 180 (Atkinson Alpha, Syd Wood) at the depot in Fletcher Street, Essendon in 1969. It subsequently passed to Ryan Bros along with the Buckley Street route. (Colin Davidson) 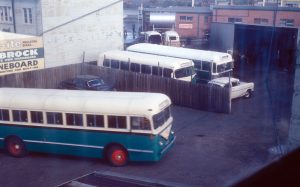 Hill’s Depot in Essendon circa April/May 1969 – which became the Moonee Valley BS depot soon after. Site was behind a Golden Fleece petrol station on Fletcher St. It backed on to a Caltex station fronting Mount Alexander Rd – where R. A. Cunningham ‘stabled’ his bus fleet. (Colin Davison)