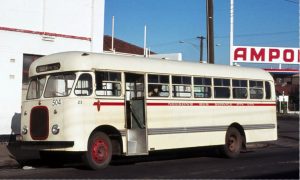 Neeson’s was well known for its fleet of Dodges and 23 was the last, built by Cheetham & Borwick in 1961. Later vehicles in the eight bus fleet were all Comair Bedfords. The route still exists, operated by Dysons, but with much reduced frequencies. (Geoff Mann)

Route 30 Moonee Ponds- East Brunswick (Lygon Street) commenced in January 1933. It extended to Clifton Hill at the start of 1947 and by July 1948 the operator was Neesons Bus Service. Renumbered 504 in 1971.