The City of Hume municipality is in Melbourne’s outer north. The current version of the local area map only includes those services that are considered “metropolitan”, with limited public transport services beyond Craigieburn and Sunbury not shown.

Outskirts townships not served by public transport in the City of Hume include Kalkallo, Konagaderra, Oaklands Junction, Wildwood and Yuroke, along with eastern parts of Clarkefield. These towns are largely obscured on the map by insets of Broadmeadows and Sunbury. 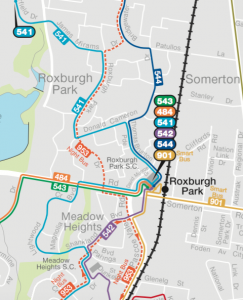 Below we have uploaded various editions issued for City of Hume, however we stress this is not a complete set by any means. Where possible, we have noted the reason(s) for the updated map.