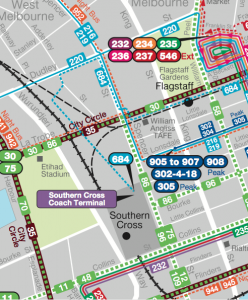 Below we have uploaded various editions issued for City of Melbourne, however we stress this is not a complete set by any means. Where possible, we have noted the reason(s) for the updated map.

Melbourne – July 2004 (PDF)
Incorrectly shows Route 236 rather than Route 238 & City Circle via Spencer St (instead of Dockands), changes that both took place in January 2003