Catching a bus in Metropolitan Melbourne on a public holiday is often a confusing game, requiring passengers to check timetables carefully to work out if their bus is running or not. 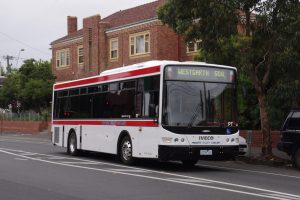 While this has been an issue for many decades, the dynamic changed in 2006 with the roll-out of the minimum standards program by the ALP state government, which promised buses running to 9pm 7 days a week across suburban Melbourne, at least once an hour. Previously a majority of routes didn’t run Sundays or public holidays and finished around 7pm weekdays and 5pm Saturdays.

A smaller side benefit of the same program was the decision to align public holiday patterns to match trains, with Saturday services operating on the vast majority (Sunday timetables on Good Friday & Christmas Day).

The progressive (but incomplete) roll-out of the minimum standards led to over 200 routes running to the new standard. A couple of dozen more also run were upgraded to a 7 day timetable but finish around 7pm on weekends.

Over 50 bus routes around Melbourne are still stuck running to a 6-day a week timetable. Nearly a dozen of theses routes still finish at lunchtime on Saturdays, three decades after Saturday afternoon trading for shops was legalised. There are also two routes in Rowville that run 7 days but not public holidays. 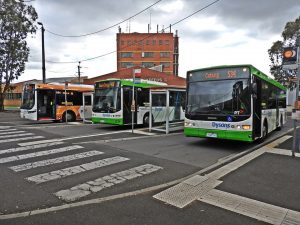 Examples of 6-day a week routes are scattered across Melbourne, but particular clusters focus around areas such as:

(It should not be forgotten there are also isolated examples of local routes running weekdays only that also deserve a full-time service, for instance the 551 (Heidelberg – La Trobe Uni), 680 (Lilydale – Mooroolbark) & 823 (Southland – North Brighton)) 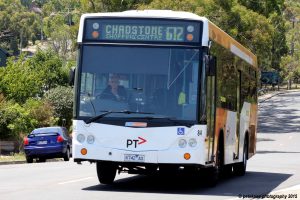 This means that passengers must be extra diligent when planning a trip on the bus network, whether that be a trip to the nearest regional shopping centre, trying to visit family or friends by using multiple routes or just trying to avoid an expensive public holiday taxi fare to get to work.

If this was the case between different tram routes or tram depots operating wildly different frequency levels or spans on public holidays, there would be a passenger outcry. But with buses carrying a fraction of the passengers, the issue unfortunately remains unresolved.

On many occasions, even the PTV website & journey planner get information wrong, adding to the confusion passengers face. Operators have at times slipped up with their news items at times.

Going back as far as mid 2009, several piecemeal attempts have been made to bring 6-day a week services. Despite this, two-dozen routes across Melbourne still miss out. This represents 45% of metropolitan routes that run 6-days a week.

Below is a list of the two tribes of 6-day a week routes, those that run on public holidays and those that miss out. Where relevant routes are marked where services finish at lunchtime or run to a limited timetable. 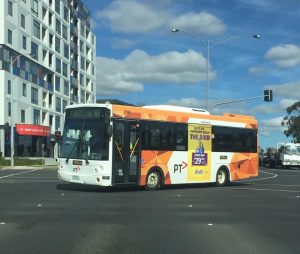 As noted above, there are also two routes in Rowville that fail to operate on public holidays, despite running across the week, as below.

Without going into every further exception, another oddity that deserves mention is the fact that Wyndham residents have different finish times on Saturdays than public holidays and must check footnotes closely to ensure they don’t miss the last bus home. PTV has occasionally shown the later trips as running on online timetables when was not the case.

Neighbouring Route 190, also in the same area, runs to 1am on public holidays to meet late night trains to Geelong.

In other areas where Saturday spans extend to 11pm or midnight, in particular Caroline Springs & Cranbourne,  these late night trips operate as normal. SmartBus routes (not included in the simplified list below) also finish at midnight on public holidays. 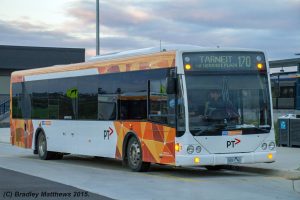 Another exception worth highlighting is that Route 684 between Melbourne & Eildon runs a special public holiday timetable. While one would effectively consider this a pseudo V/Line coach service given the distance & service level, Healesville residents may use the service to supplement the more frequent 685 connection to Lilydale, which runs to its normal Saturday timetable.

In the mid 1990s train and tram services were standardised to run a Saturday timetable on most public holidays, with a Sunday timetable applying for Good Friday and Christmas Day. 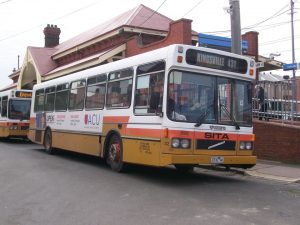 However, the same didn’t occur to buses, with the general status quo was the handful of buses that ran on Sundays would generally run to a Sunday timetable on public holidays, and the rest simply had no service.

At the time there were however a long list of exceptions to this rule however – special timetables for routes serving La Trobe Uni when classes were held; similarly Saturday timetables on select holidays for Eastrans 630 & Melbourne Bus Link routes; no public holiday service on Ryans 465, Westrans 410 or 411, Panorama 582, Invicta 681/682; just to name a few exceptions to the rule. Furthermore, somewhat at random, not all of these routes ran Good Friday and Christmas Day, but others did not. Yet another example of buses being the poor cousin.

Bus passengers would see the start of change from late 2006. The ALP state government funded a massive upgrade of evening & weekend bus services across Melbourne as part of their “Meeting our Transport Challenges” plan, which saw a progressive roll-out of so-called minimum service standards from late 2006.

Other than the progressive roll-out of extended span until 9pm 7 day across over two hundred routes and hourly headways, moves were made to align public holiday bus timetables with trains & trams at long last. Sunbury was an unfortunate oddity out in the upgrade program, for sometime town buses continued to follow a Sunday timetable on pubic holidays.

In the transition period, there were plenty of inconsistencies between routes, for instance the 700, 703 & 888/9 Smartbus routes operating to a Sunday timetable on public holidays, while the majority of intersecting routes progressively adhered to a Saturday timetable. 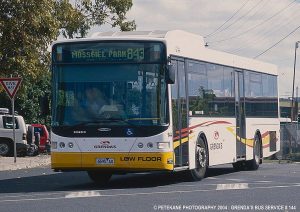 Although a mess, one was hoping this would be an interim issue. However, with the minimum standards roll-out remaining incomplete, it became apparent that moving to a consistent public holiday pattern across all bus routes would be preferable

In mid 2009, shortly after the introduction of the Red orbital 903, Ventura & the then DoT came to an agreement to standardise public holiday timetables across all Ventura and Nationalbus routes to the same pattern as those routes running minimum standards

By this stage, the only Ventura routes with a Saturday timetable but not public holidays were 689 & 766, however most Nationalbus routes at this point were still running to a Sunday timetable on public holidays, with the exception of freeway routes 304 & 307. Other than a boost for trunk routes that operated Sunday, the change saw a number of 6 day a week routes gain public holiday services for the first time. 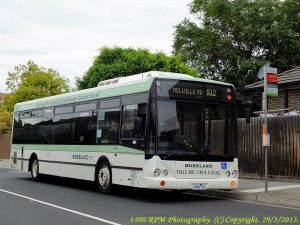 Moreland #64 (Mercedes Benz O405NH, Custom Coaches “CB60”) on the Saturday lunchtime Melville Rd terminator in Reynard St, West Coburg. This is the only trip of the week that terminates at Melville Rd and Reynard St (29/3/2013) (Jason Roberts)

As always though, there is an exception – due to funding constraints, when East-West 561 was extended to Coburg in May 2011, with Sunday services added, the existing arrangement continued – that is Labour Day & Cup Day are the only two public holidays that the route operates, both to a Saturday timetable.

A condition of the new bus franchise saw Transdev upgrade the former Melbourne Bus Link routes to the new pattern in 2013. Previously these routes had operated to a Saturday timetable only over Labour Day and Cup Day. 215 reportedly ran to a special timetable on public holidays to maintain interlining with 460 (which ran to the standard pattern) however this timetable was never available publicly.

Ventura’s 772 in Frankston was standardised with service level upgrades in April 2013. The change of state government saw funding flow to standardise various 6-day a week routes at the former Grenda & U.S. Bus Lines depots in 2015. Bus services in Sunbury along with Ryans’ 468 & Sita’s 404 & 431 also enjoyed upgrades around this time.

Ad-hoc upgrades to routes have continued in recent years, with routes including Dysons’ 518 & Cranbourne Transit’s 799 gaining Sunday services. With these upgrades, public holiday services have also been standardised.