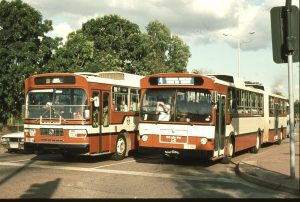 I left Melbourne with the temperature at 9o C and arrived in Darwin and it was 39o C! The task was simple. I had three days to photograph the entire Darwin fleet. An easy task I thought, as there were only 42 buses in the fleet, however this all had to be fitted in around a tight teaching schedule. I had made a good effort in Perth a few months before getting over 400 of the then 900+ fleet in my camera bag. This would be a breeze. As soon as I had the chance I set off for the City Interchange ready to photograph every bus in sight.

I had done my homework well and knew that Darwin had an interesting small fleet, being a combination of 15+-year-old units to some of the latest articulated buses. There were only two depots, the main at Parap and the smaller one at Casuarina. 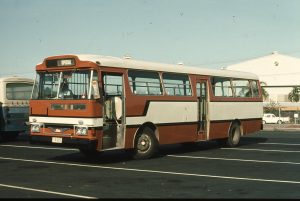 At the time of Bob’s visit in 1990 (25) was one of two Hino BT140/ PMCs dating from 1974-5 which were the oldest buses remaining in the Darwin Bus Service fleet. It is seen posed in the depot. (Robert Birrell)

At the time of my trip the oldest buses were 11 Hino’s of varying vintages. These were acquired from the mid-1970’s and were the first non-British units to arrive. There were nine Hino RC 420’s in two batches and two Hino BT 140’s. The eldest was a batch of six Hino RC 420’s with Pressed Metal/B45F bodywork delivered in 1974. Following on from their delivery were two Hino BT 140’s with, unusually at the time for Darwin, dual door bodies to a different design. The last two Hino RC 420’s delivered in 1976 reverted to single door with PMC Adelaide/B45F bodies. All 11 buses had originally had registrations in the Commonwealth “ZBC***” series but now had the Darwin standard ‘fleet number + m/o 8.0 fleet number series’. I seem to remember that my first session got most of these units as they were still in intensive use at the time. One elusive unit was 30 but this was found on the hoists at Parap.

Darwin moved into the age of the modern urban bus with the delivery of the first of 18 Leyland B21-1R-DDA’s in 1979. I have a soft spot for the B21 as I think it should have been more successful than it was. The B21 was a variant of the Leyland National concept offering National running units in a conventional chassis. It was not as successful as Leyland would have liked and other than the 18 Darwin units, 20 went to MTT Perth, three to Surfside of Tweed Heads and two to Melbourne Brighton Bus Lines.

Darwin tried 18 Leyland B21 – GM powered buses bodied by PMC between 1979-81. No. 41 was in the middle of the batch and is seen laying over in the Casuarina interchange. (Bruce Tilley)

Darwin’s 18 entered service over a two year period and were fitted with Pressed Metal/B45F bodies. Engines were the small but powerful GM 6L71TA 6.9 litres producing 201kw (270hp). This was coupled to an Allison HT 740 4 speed automatic gearbox and the combination certainly had a distinctive sound. With these as the main units in the fleet I crossed many more off my list of buses to photograph. I was concerned though because I had not seen no. 44 of this class and was told that this was the one in an all over advert. My time was running out too quickly.

An easy bus to identify was Darwin’s only articulated unit. This was the only Leyland/DAB articulated bus in Australia. Built as a demonstrator in 1979 it was bought by Darwin Bus Service in 1980. Its external appearance resembles the production batch of B21’s and until the arrival of the M.A.N. artics was the only such bus owned by Darwin.

Darwin B.S. (34) was the sole Leyland –DAB articulated bus to come to Australia and was bodied by PMC South Australia in 1980. After its life in the NT it ran for Hoy’s at Wangaratta as a school bus. (Bruce Tilley)

Next on my list was the remaining Toyota Coaster no.53. It is unusual for a capital city Government operation to run buses as small as the Coaster but Darwin had two. By the time of my visit one had gone but I captured 53 leaving Parap, the only time I saw it during the visit.

Darwin continued to update its fleet with the introduction of eight M.A.N. urban buses. Four artics and four rigids entered service in 1984 and 1985. They have stylish PMC Adelaide bodies and because they were the front line units I had no difficulty in getting all eight on film. At the end of day two I was close to my goal but still B21’s 44 and 46 had eluded me. 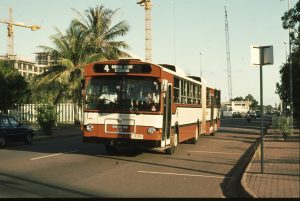 The first of an eventual seven Volvo B10ML articulated buses had arrived in 1989. I had seen the first being built at Volgren’s factory in Dandenong and was keen to see it on the road. Because of Darwin’s strict delivery oriented fleet numbering regime this series of buses was destine to be numbered in the 60’s, 70’s and 90’s. Still when I was there only 62 was to be seen or so I thought. The bodywork on these buses was identical to the current Victorian deliveries, but in Darwin they looked different. One lucky run around the corner and brand new 64 was in the bag. Now with only a few hours to go I still looked for the elusive B21’s 44 and 46.

You have to have luck in this game and I thought that I would have one last look at Parap depot for the B21’s, and there was one of them. Not in a good position but the all over advert 44 was up on the hoist and in a second it was in the bag also. 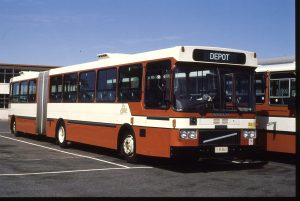 Oh well 39 out of 40 was not a bad effort and I headed for the airport resigned to having missed by one. As I headed out of the yard I heard the distinctive whine of a ‘baby GM’ behind me and turned to see 46 running slowly towards me, slow enough for a good shot. And then that was that. Darwin did take two Fuji artics soon after but unfortunately I did not get a chance to see them. Subsequently they returned south.

I left Darwin and the temperature was again 39o C and I returned to a 9o C Melbourne! But I didn’t care; I had got the entire fleet.

FOOTNOTE: Many of Bob’s pictures as used in ABP were supplied in too small a size to reproduce well on the web. Since his death the originals are no longer available to BCSV so the pictures used here are a mixture of those by Bob, Bruce Tilley and Geoff Foster. 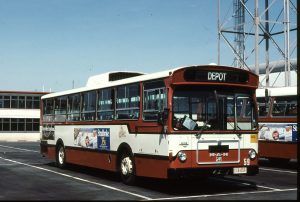 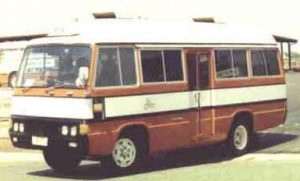 The one Toyota Coaster in the fleet (53) was found on a run at Parap. It dates from 1982. DBS has had no further minibuses since then. (Robert Birrell) 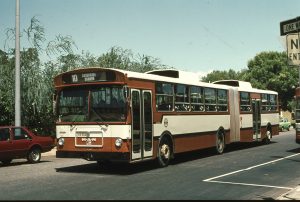 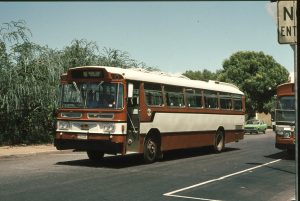