Swedish based Scania-Vabis (now known as Scania) was involved in bus production from the early in the 20th century, first with convertible truck chassis. Formed by a merger in 1911, the company’s origins can be traced back two decades earlier.

Vabis was founded in 1891 to manufacture railway carriages. Mechanical engineer Gustaf Erikson joined the company five years later to develop the earliest automobiles in Sweden before the turn of the century, with trucks added in 1902.

Meanwhile, bicycle manufacturer Maskinfabriks-aktiebolaget Scania’s was born in 1900, adding automobiles and then trucks to their remit from 1903. This move soon proved so successful that they ceased producing bikes in 1910, along with their short-lived entry into other products such as vacuum cleaners.

Maskinfabriks-aktiebolaget Scania had a pressing need to find a coachworks partner to keep up with the increased production merged with Vabis in 1911, whom by this stage was experiencing extremely poor sales and in danger of being closed down altogether. 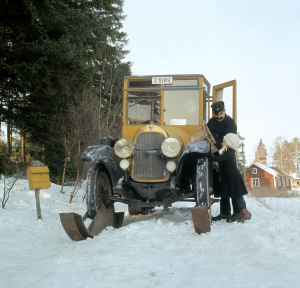 The first bus was delivered to operator Nordmarkens Automobiltrafik on the forested westernmost parts of Sweden in the same year. It was equipped with a chain-driven chassis built by Scania in Malmö and an engine and body by Vabis in Södertälje and ran on a route linking Åmot with Årjäng. Although it was able to handle with the harsh Swedish winter, it met a tragic demise in the early 1920s when it sunk after being driven onto the frozen Stora Gla lake.

Scania-Vabis was approached to produce 15 post buses for the Swedish Post Office in the early 1920s. These buses were specifically designed to cope with the icy winter conditions, featuring steered skids on the front wheels, inspired by a Citroën desert vehicle. They were also introduced heating, with fresh air heated by the exhaust system, an idea which soon became common and unfortunately not patented by the Post Office’s technical expert Ernst Nyberg.

In 1946, the company introduced their B-series of bus chassis, with the engine mounted above the front-axle, giving a short front overhang and the door behind the front-axle and the T31/T32 trolleybus chassis was available from 1947. A next generation of the B series was introduced in 1950 and was updated through the ’50s and ’60s.

One of the cult Scania-Vabis C-50 Metropol buses produced for operation in Stockholm in the 1950s. (Scania Group)

Major expansion saw Scania-Vabis establish new manufacturing plants in both Brazil (1959) and the Netherlands (1964), the latter driving market growth across France and Germany.

Scania-Vabis acquired Be-Ge Karosserifabrik in 1968, who had been making truck cabs to both Scania-Vabis and competitor Volvo. The next year took over coachwork company Svenska Karosseri Verkstäderna (SKV), and created a new subsidiary, Scania-Bussar. Bus production would soon be consolidated in Katrineholm.

1969 saw Scania-Vabis merge with Saab AB, a fellow Swedish company producing aircraft, cars and for a period early corporate computers. The merger, known as Saab-Scania AB would last until 1995, with the truck and bus manufacturing arm now trading simply as Scania. 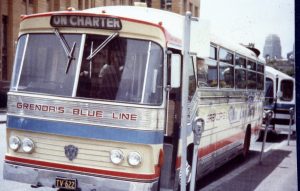 By the late sixties the standard bus chassis became the BR110 for rear engine and BF110 for front engine. The numbers reflected the engine displacement of 8 or 11 litres and that stayed the case until the end of the century.

In 1971, a new range of longitudinally mounted rear-engined chassis was launched, with the BR85 and its larger brother, the V8-powered 14-litre BR145 for coaches and the BR111 for buses. The 112 series was launched from 1978.

In the late ’60s, a number of Australian coach operators, in particular Redline, re-engined buses using Scania Vabis engines which were imported through the distributor, Kockums.  Powers of Kirrawee re-motored a Bedford KM with Custom body for their Blue Line Tours subsidiary, which was subsequently bought out by Grenda in 1971, allowing expansion into the Sydney day tour market. 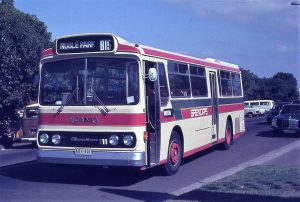 1978 saw the first importation of Scania bus chassis with Grenda once again leading the way with three units. The first two were BR111 two door track buses with Domino bodies delivered in January 1978, followed the next month by a BR145 coach, also bodied by Domino and used on their Dandenong-Cowes service.

In 1979, Scania imported a fully built LH Drive B112 city bus as a demo. Apparently, they also imported a RH drive chassis in the same year which was also demonstrated to various authorities. It received a Bolton body in January 1982 and saw brief service with various government authorities including the BCC and ACTION. It was sold to George Dawson (Kangaroo Flat Bus Lines) in March 1985 as their No 10 for his Bendigo town bus services, later passing with the business to Christians. 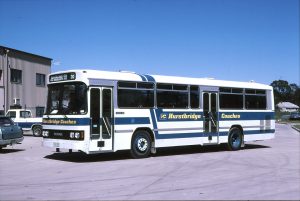 The letter codes can be explained as follows:

From December 1983 through to May 1984, fifteen PMC (NSW) bodied Scania buses were delivered to the Tasmanian Hydro Electric Commission. These were on P82M modified truck chassis.

In 1984, a Centurion bodied Scania coach and route bus went to Kangaroo Flat BL – the first of quite a few for that fleet. The first Scania advertisement for buses in T&BT was a fold out spread in the September 1984 edition.

From 1984 when the Victorian government began funding new route buses Scania were in the mix – firstly with the K82SR and K92CR, followed by the K93CR from 1986. These were also bodied as school buses and two axle coaches. Melbourne operators included Hurstbridge, Moreland and Invicta. 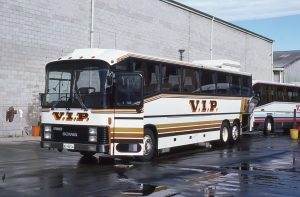 VIP RI9654 (Scania K112TR PMCSA), one of the fleet taken over with the Olympic East West Express business. (Geoff Foster)

The same period saw the introduction of the K112TR and later K113TR as a three axle coach chassis. Many were used on express services especially by Sunliner and their Victorian partner Landmark Tours. After starting with a Volvo, Olympic East West Express soon changed to Scania. VIP Express also had six with imported Neoplan bodies which made a stunning comparison to the local bodies. Murray’s Coaches in Canberra were another large Scania purchaser, including coaches in Countrylink livery.

After a decade, Scania had now made their mark in Australia. Their market share would continue to grow during the high-deck coach era, alongside their entry into the government bus market during the nineties. 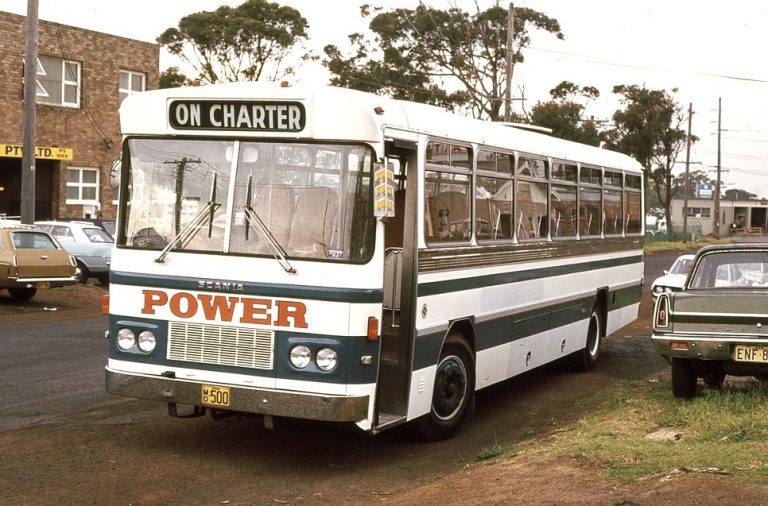 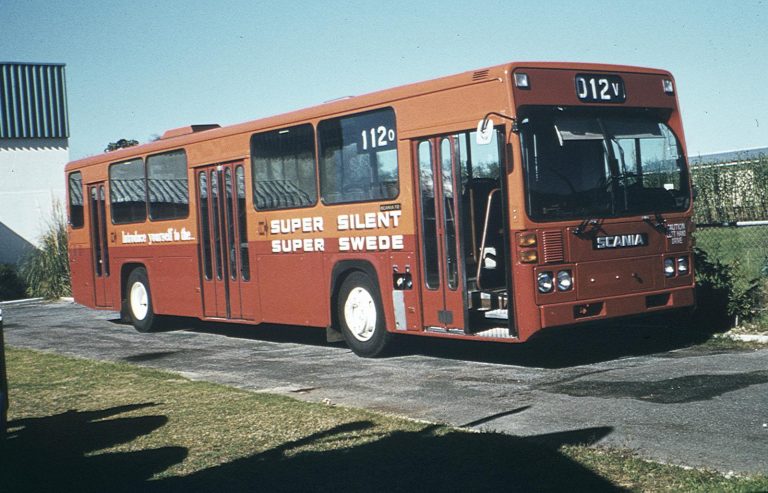 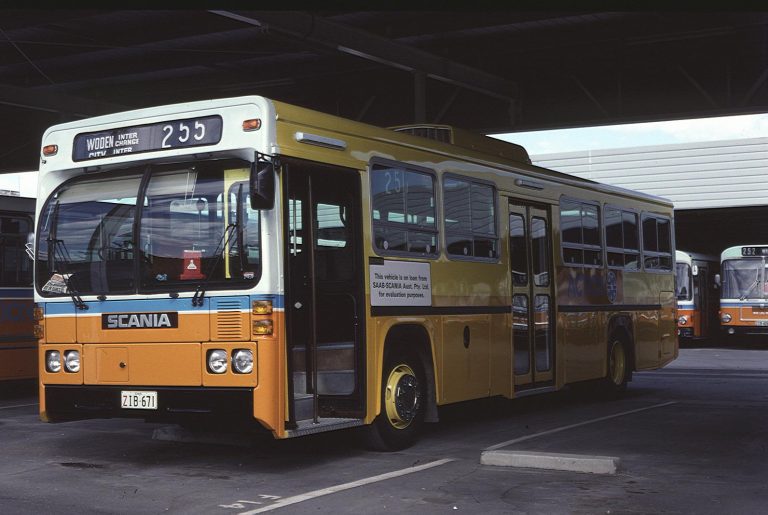 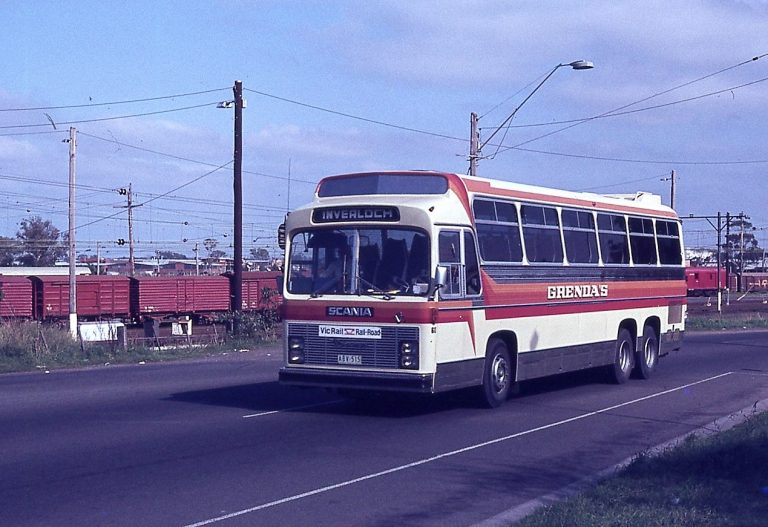 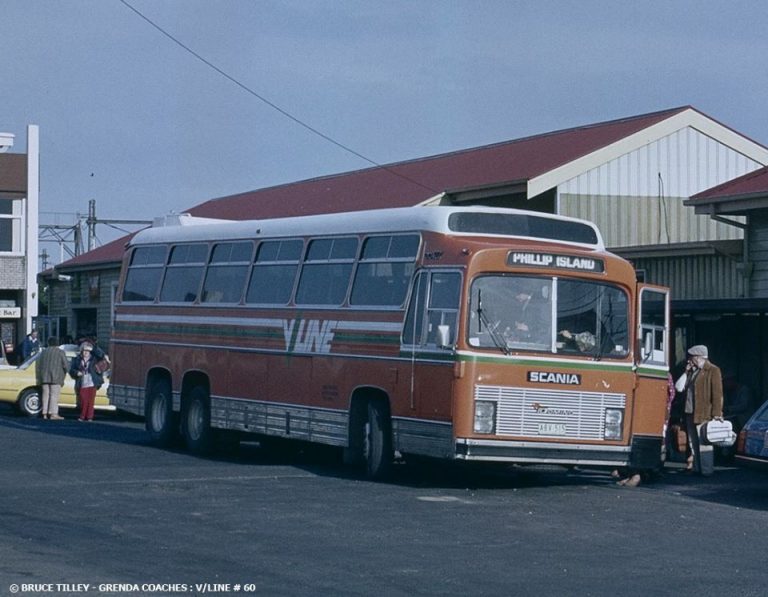 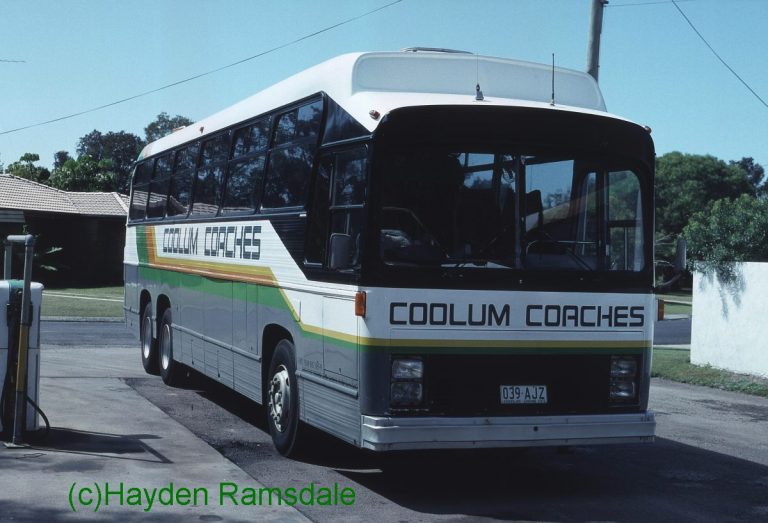 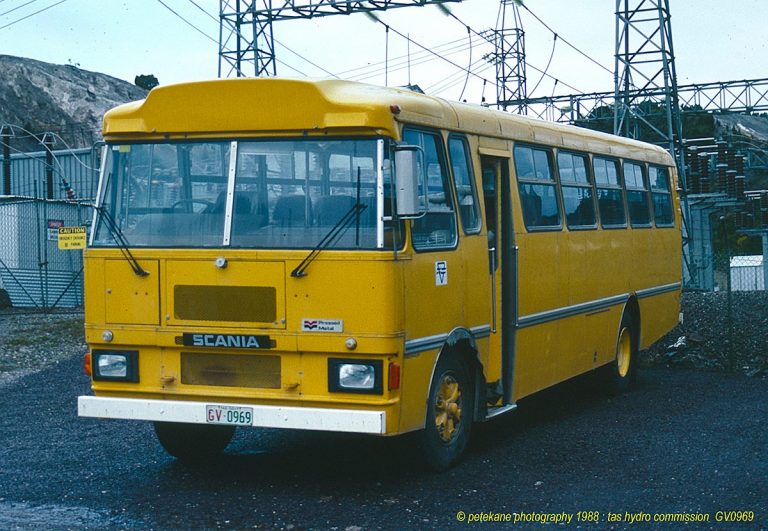 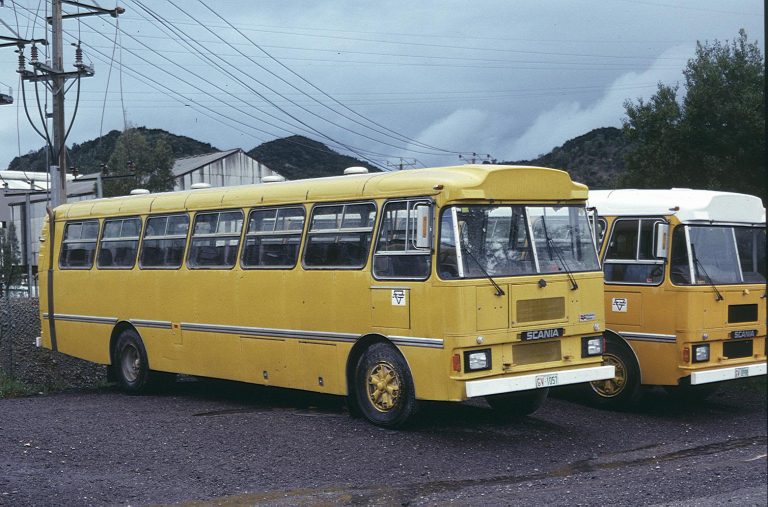 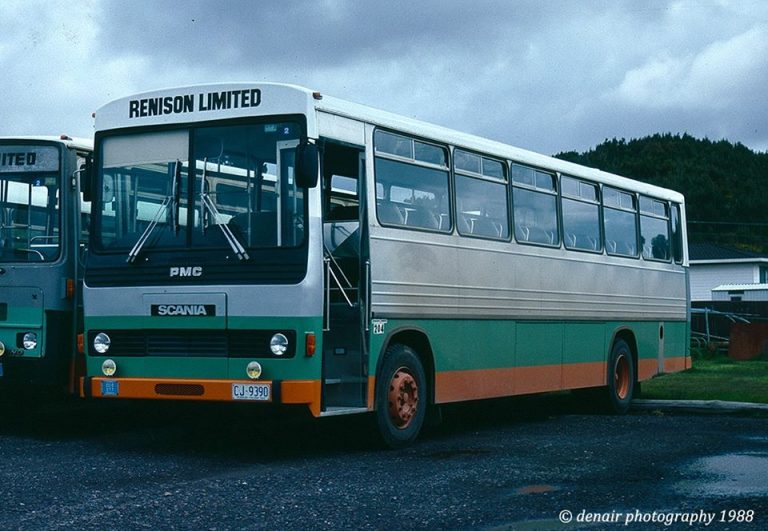 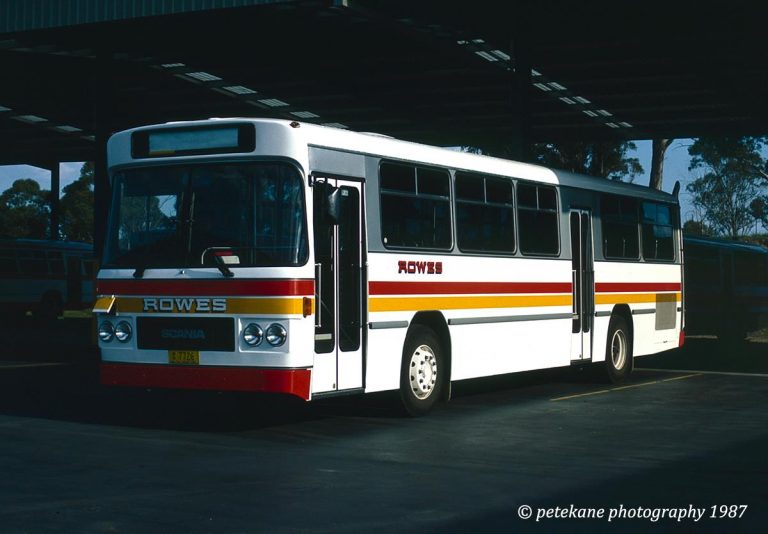 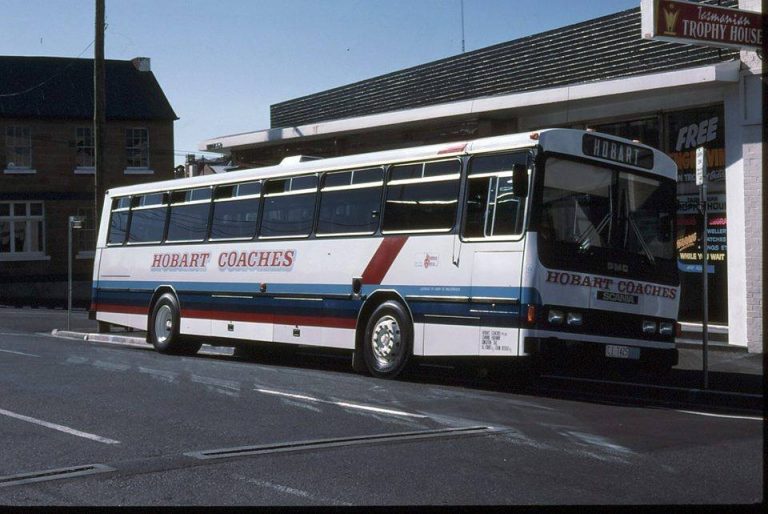 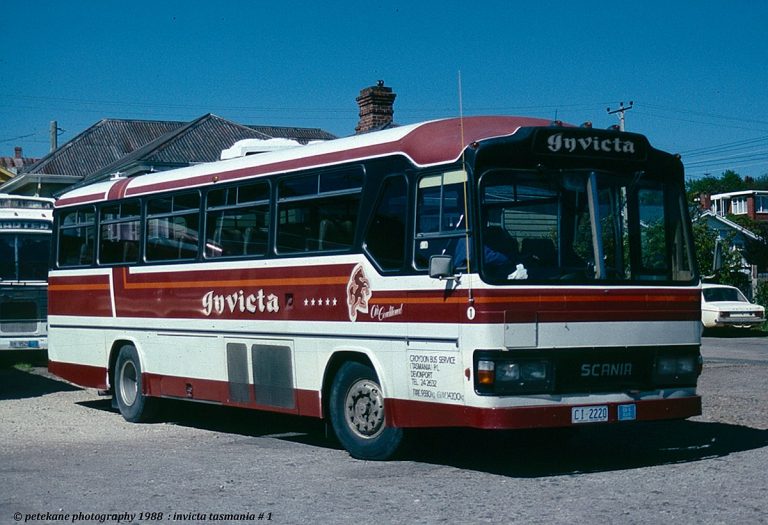 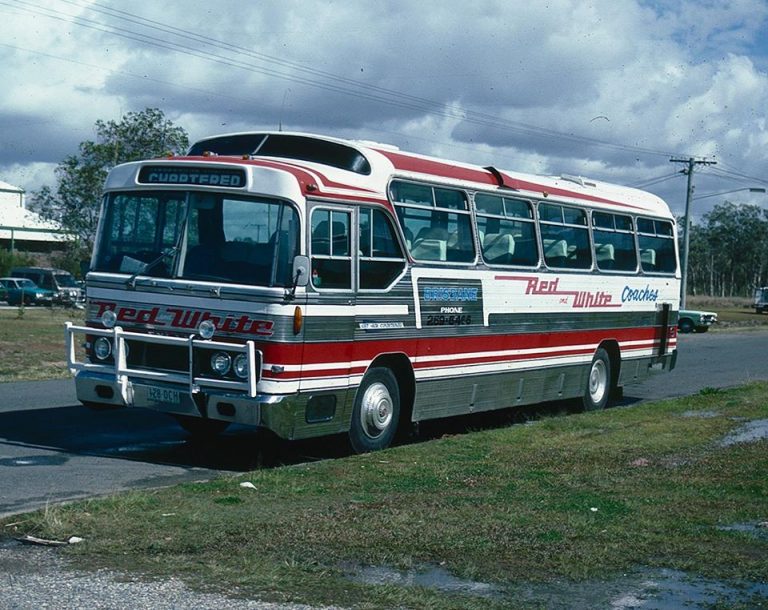 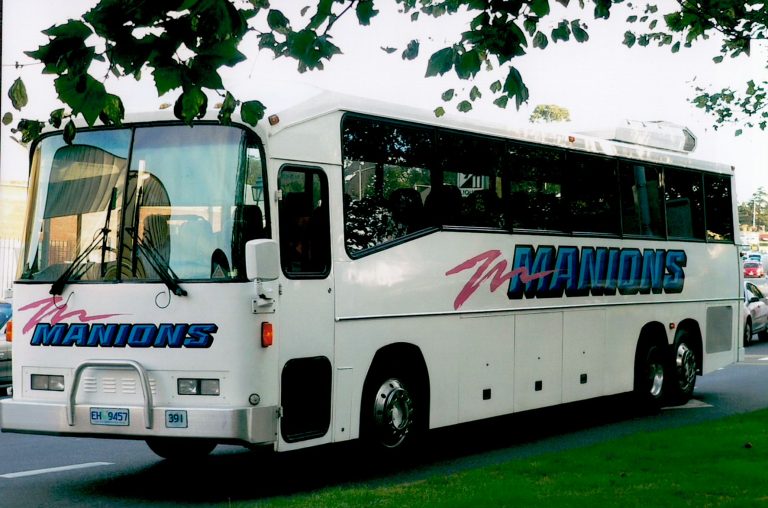 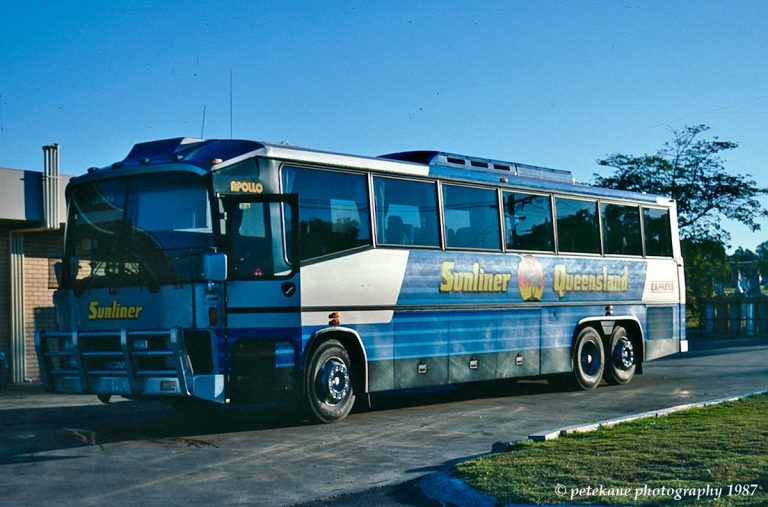 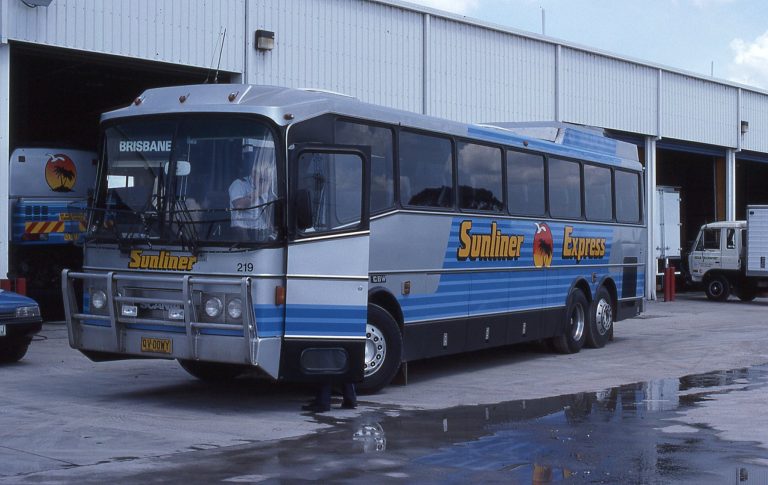