ACTION in Canberra proposed to trial two M.A.N. SL202s in 1992, one with a diesel engine and a second running on natural gas. Both were ordered with Ansair bodies, numbered as #734 & #735. 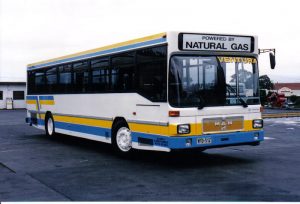 The natural gas trial was soon abandoned, with M.A,N. instead purchasing the bus to run as a C.N.G. demonstrator elsewhere in Australia. A 6 week trial was still undertaken in Canberra, although there is debate if it actually ran in revenue service (the below rare photo suggests it did).

The bus also operated at Ventura for a time, as seen below, registered on South Australian number plates as VFD 512.

It was reportedly quite limited, only able to do 2 or 3 trips before it had to trundle off to get refilled at the local gas works!

After a stint as a demonstrator, it was sold to Bathurst Coaches becoming their #8 (MO 667), where it is understood it was converted to a diesel engine. It later operated with Highway Hiker of Murray Bridge SA as their #5 (WZV 651). After the takeover by LinkSA, it was renumbered as #211. 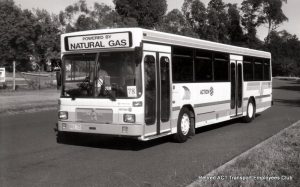 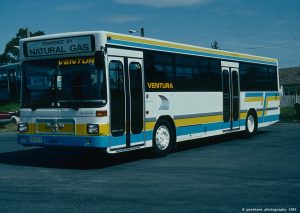