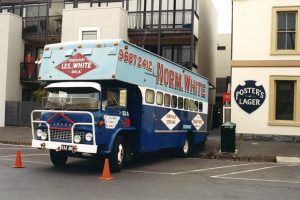 KAA 486, a Bedford TK furniture van with Les White and later Norm White is seen at Williamstown in 2003 (Steven Haby)

Technically not a bus… this is a furniture/picnic van that once belonged to Les and Norm White of Yarraville. On weekends the van could be converted to carry passengers hence the reason for the windows along the side. Picnic vans were licensed by the Transport Regulation Board and faced tight controls on what they could do.

Naturally the bus industry was not happy as the vans provided a cheaper (and more basic) alternative to chartering a bus. Popular with scout groups, church groups and bushwalking clubs.

Picnic Vans ran with GP licences, which we believe stands for Goods/Picnic. In 1971, there were 28 licensed vans but by 1984, the number was down to 6.

The van pictured is on the Bedford TK chassis. Norm also had a Bedford J3 truck as well, of 1961 vintage. 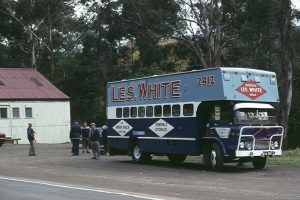 The only other licensed operators in 1984 were B Baxter of Brunswick, J Baxter & Son of Bentleigh and Williams of Glen Waverley. J Baxter & Son’s van, built by R.E.Mee, was later acquired by the Melbourne Bushwalking Club.