This story starts in 1943. Dyson’s Peninsula Motors Pty Ltd of Frankston, south east of Melbourne, was having great difficulty in coping with the movement of large numbers of service personnel between the railheads at Frankston and Mornington and the many army and navy camps located on the Mornington Peninsula. Roy Frederick Weber, had his own body building business in Brighton before being asked to join Peninsula Motors as their the Engineering Manager. Encouraged by Eric Marcus Hall, the company Managing Director, Roy Weber designed and built their first semi trailer bus. 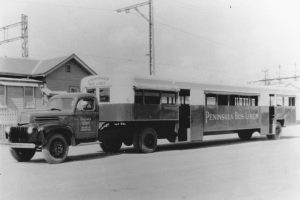 It was a 120-passenger trailer built on a McGrath semi trailer frame. The body was constructed from timber, masonite and canvas with no glass in the window frames, just roll down canvas screens. The seats were timber slats and a tubular steel frame. The prime mover was a 32hp Ford unit and the complete vehicle weighed 9 tons (9.15 tonnes). It must have had trouble climbing the hill out of Frankston as it would have been over 17 tons fully loaded. The Melbourne Herald newspaper ran an article on it on 23 March 1943.

The vehicle was inspected not only by the Victorian authorities but also by authorities from as far away as Western Australia, including the police. A second vehicle was soon built in the operator’s workshops and went into service on 29 October 1943, when it was used to take local and state officials, politicians and journalists on a tour of the operator’s facilities. This vehicle was described as a 60-seat luxury coach, 45 feet in length. Once again it was constructed of wood, masonite and canvas on a McGrath frame. This time the seats were upholstered and the prime mover was still a 32 hp Ford.

Another six semi trailer buses followed this one. Some were pulled by Reo prime movers. 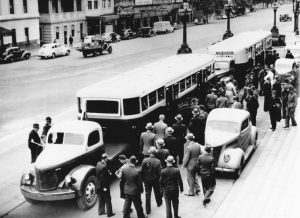 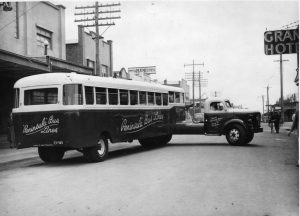 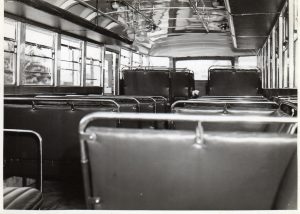 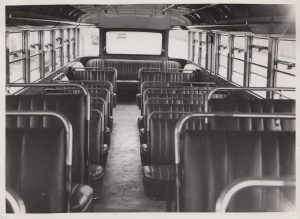 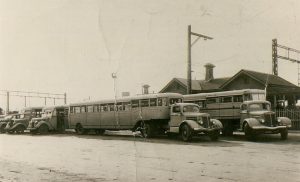 In 1945, Roy Weber from PBL and Laurie Hardiman from Fowler Constructions designed and built the “Landliner”. This was a 30 passenger luxury touring coach which had airline style reclining seats, carpeted floors, refrigeration, tea servery, toilet, an observation cabin and hostess. It could also be seated for up to 60 for metro work. The front dolly housed the mechanical units, just like a conventional prime mover. Motive power was provided by two Ford side valve V8 engines mounted on either side of the dolly. 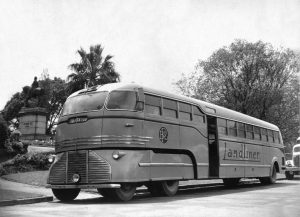 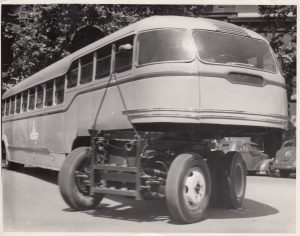 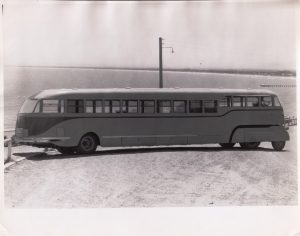 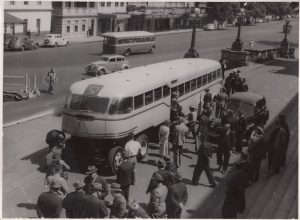 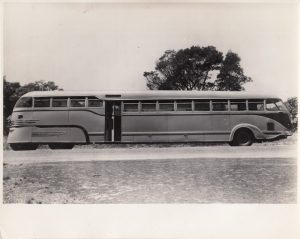 The engines, which ran in tandem, were operated in the same way as those fitted to the Fageol Twin Coach vehicles made in the U.S.A. in the 1930s. Steering was performed by hydraulics and the driver sat in the middle front of the passenger compartment. A large pole was mounted at the centre of the dolly, which extended in front of the passenger compartment. This allowed the driver to see which way the dolly was facing, a visual check as it were. The Melbourne “Herald” newspaper featured the “Landliner” on show to the public and politicians on the steps of Parliament House at its launch on 28th November 1945.

The police at the Motor Registration Branch registered the vehicle as HG-640 but the officers at the Transport Regulation Board would not allow it to carry passengers. In spite of extensive testing and appeals to politicians, the bus was never allowed to carry passengers on scheduled services in Victoria and only ran on special permit. The hydraulic steering was one of the reasons cited in the press. Indeed during the Frankston bus wars in 1946, the local paper reported that the vehicle had run into a ditch when the steering failed, a report that was denied by the bus operator. It did, however, carry passengers on an extended tour to Toowoomba in Queensland. The passengers were taken to Albury in another vehicle where they boarded the waiting Landliner. The vehicle experienced no problems on this trip.

By 1947 Peninsula Motors had had enough. They sold the vehicle to the West Australian Government Railways. It left Victoria by train. Two similar vehicles, called Cheetahs, were also delivered to the WAGR. None were successful and were converted into “traditional” semi trailer buses with Foden tugs for the remainder of their WAGR service. The Peninsula and Portsea companies continued to operate conventional semi trailer buses up to the 1960s. Peninsula had 3 Ford and Reo prime movers while the Portsea vehicles were all Whites. This was a popular holiday area for Melbourne people and large capacity buses were needed. Even today 14 metre buses are used on some of these runs.